Determining and assessing the value of movie posters can be inherently difficult, this is due to the subjective nature of posters and the value placed upon them. However, we can rely upon a number of factor such as authenticity, title, design and/or artist, condition and objectivity to help in determining the value. The first step to assessing poster value is to understand that it is based purely on economics, supply and demand. The basic principle of economics is that cost is determined by availability x demand – and the balancing of the two, however, always remember – A poster is only worth what someone is willing to pay for it.

HOW DO I AUTHENTICATE MY MOVIE POSTERS?

When determining the value of a movie poster, the most important factor to ascertain is the authenticity of the item and whether it was released when the film was originally released to cinemas or on a subsequent re-release later on.

To establish the authenticity you can check the paper size, texture and NSS information to determine the age of most film posters. Many vintage posters before 1940 had studio logos and copyrights but were often not dated. After 1940, National Screen Service (NSS) distributed most film posters and these are dated with the year of release and the one to four digit code assigned to the film, for example, Star Wars holds the NSS number 77/21. This information is located at the bottom of the poster. Re-release /re-issued posters are still considered original theatrically released movie posters, but will generally hold less value than a poster issued for the first release. Commonly you can determine the release of a poster by utilising the NSS information in the bottom right hand corner of the poster. If the number are preceded by the letter ‘R’, for example, R79, this signifies that the poster was re-released in 1979.

Since the demise of NSS in the US in late 2000 and 2007 in the UK, movies no longer receive NSS numbers. Therefore, determining that a movie poster is a re-release can become a bit more of a challenge. Some key phrases are ‘Brought Back by Popular Demand’, ‘Digitally Re-Mastered’ and ‘For Two Weeks Only’.

For newer posters from the 1990s onwards it can become somewhat more difficult to determine authenticity. Many of the most popular and desirable films have suffered with being illegally reproduced over the years, more commonly referred to as bootlegged. They have often been reproduced in the tens of thousand. Have a look at our Movie Poster Authentication article for more information on how to spot a bootleg poster.

WHAT MAKES A MOVIE POSTER VALUABLE?

To determine the value of a movie poster a number of combinations need to be factored, most important the title of the film. The most desirable posters and indeed expensive are those from the 1930s films such as Metropolis, The Mummy or The Black Cat. Find out what the Top 10 Most Expensive Posters ever sold are, below. Another factor to desirability of the poster is the graphics and design used on the poster. It is not unusual to find critically slated films to have highly desirable movie posters due to being illustrated with great art or because it was designed by a well-known poster artist. Over the last half century many of the most well-known poster artists have illustrated movie posters. Finally, the last factor is condition. Many poster collectors consider condition to be the most important factor in deciding a posters value and many will pass on a poster due to its condition. These factors are usually the most important in determining value.

The most valuable posters are from the early 1900’s through to the 1950’s. Some titles from the 1960’s and 1970’s can also command good prices but the value of titles from the 1980’s onwards drop dramatically due to the increase in the print runs. From the early days through to early 1970’s a normal poster print run would range from 3,000 to 5,000 per poster,. From the mid-1970’s through to the present day, the print runs went up dramatically to 15,000 to 30,000 for each title. Most modern movie posters are produced in such large quantities often hitting hundreds of thousands made particularly for a major film distribution like, Rogue One: A Star Wars Story. These normally become available for purchase by collectors indirectly through various secondary markets. Accordingly, most modern posters are not rare. However, some recent posters, such as the recalled Pulp Fiction ‘Lucky Strikes’ US One Sheet poster, is quite rare and valuable. Collecting posters really came to prominence in the 1970’s, previous to this most movie posters were simply thrown away after the run of the film.

The highest prices are always generated from the horror and science fiction genres with these titles continuously commanding and achieving the highest prices and whilst the popularity remains will continue to do so. However, some other genres and movie stars that produced some high figures include Film Noir titles, The Marx Brothers, Marilyn Monroe, James Dean, Douglas Fairbanks, early Walt Disney cartoons and Alfred Hitchcock.

HOW CAN I DETERMINE A VALUE FOR MY MOVIE POSTER?

As with any collectible, prices can and will fluctuate wildly due to the factors outlined above. There is no definitive guide to prices for movie posters unlike other items such as cars where a value can often be determined by using recognised industry guides such as Glass’s. Objectivity will play a part in the value as one collector will value a piece differently to another. Staying objective can be difficult and is often challenging as people will generally have some kind of emotional attachment to the item which will ultimately impair judgement.

The most crucial part of assessing a value for a poster is research. To begin you would look for comparable movie posters which are similar to your own. It is important to note that you have to look for the same characteristics, such as, one sheet vs one sheet, a poster in a very good condition with another in a similarly very good condition otherwise you will end up comparing apples with pears and won’t get a true reflection on previously realised prices.

I recommend using Bruce Hershenson’s Sales Results at emovieposter.com or Heritage’s Auction Archives at ha.com. Utilising these two sources you will have access to a huge catalogue of items previously sold. Alternatively, browsing previously sold items on eBay can also help to determine a value for more recently released movie posters. When I am trying to determine a price I will sort prices from High to Low. I do this to find an average price and remove items that may have had a bidding war between 2 bidders or was sold cheaply due to lack of understanding of the item they had (this is more relevant to eBay than EMP or HA). Sort sold dates from Recent to Oldest as a value from 10 years ago will have no relation to the price today. This part can be time consuming but the more research you complete and compile the more accurate the resulting value will be. 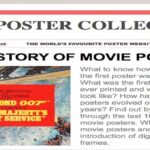 The movie poster is thought to have originated in the 1870s when Paris artist and lithographer, Jules Cheret, introduced a printing technique that produced images with intense colour and rich texture. By the early 1890s, Paris streets were plastered with lithographic images hawking everything from bicycles to cognac to circus performances. These artful graphics became instant collectables, spawning exhibitions, journals and dealers. WHAT WAS THE ...
Read More 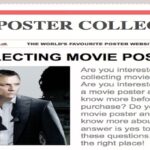 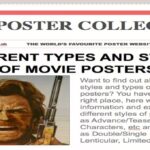 Looking to find out about the different types and styles of movie posters? You have come to the right place, here will find information and examples of different styles of posters such as Advance/Teaser, Final, Characters, etc and types such as Double/Single Sided, Lenticular, Limited Edition, etc. Want to find an article quickly? Just click the link below: Double/Single Sided Posters Advance/Teaser Posters Main/Final Posters Character ...
Read More 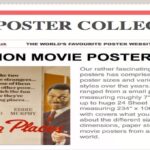 Our rather fascinating world of movie posters has comprises of numerous poster sizes and various different styles over the years. They have ranged from a small postcard measuring roughly 7" x 5" all the way up to huge 24 Sheet billboard poster measuring 234" x 106". This article with covers what you need to know about the different sizes including dimensions, paper stock and use of movie ...
Read More 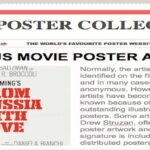 Normally, the artist is not identified on the film poster, and in many cases, the artist is anonymous. However, several artists have become well known because of their outstanding illustrations on film posters. Some artists, such as Drew Struzan, often sign their poster artwork and the signature is included on distributed posters. Here you will find some of the classic illustrations from these great artists. The ...
Read More 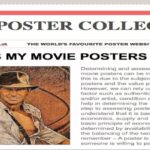 Determining and assessing the value of movie posters can be inherently difficult, this is due to the subjective nature of posters and the value placed upon them. However, we can rely upon a number of factor such as authenticity, title, design and/or artist, condition and objectivity to help in determining the value. The first step to assessing poster value is to understand that it is based purely on ...
Read More