Back to the Future Part II (also known as Back to the Future 2) is a 1989 film directed by Robert Zemeckis. It was produced by Neil Canton and Bob Gale with the screenplay be ing written by Bob Gale and based on the original characters from Bob Gale and Robert Zemeckis. The film stars Michael J. Fox, Christopher Lloyd, Lea Thompson, Thomas F. Wilson, Elisabeth Shue, James Tolkan, Jeffrey Weissman, Casey Siemaszko, Billy Zane, J.J. Cohen and Charles Fleischer.

This is a sequel to the 1985 film Back to the Future and is the second in the Back to the Future trilogy. The story continues directly after the first film. After reparing the damage from their previous time travels, Marty McFly and Doc Brown must travel to 2015 to stop Marty’s son from ending up in prison. However, following their arrival Biff Tannen steals the DeLorean and travels back to 1955, where he alters history by making his younger self very wealthy.

Back to the Future Part II was not without controversy when Crispin Glover who played George McFly in the first film was replaced after failing to come to an agreement over his salary. Rather than writing the character out of the film, the director Robert Zemeckis used previously filmed footage as well as new footage from actor Jeffrey Weissman, who wore prosthetics to change his appearance and various obfuscate techniques. Crispin Glover filed a claim against the producers on the grounds they did not own his likeness nor had permission to use it for the film. He won the case and clauses in the Screen Actors Guild collective bargaining agreement now prevent this behaviour.

Claudia Wells who originally played Jennifer Parker was recast with Elisabeth Shue playing the role in the second film. She was due to reprise the role but unfortunately due to her mothers illness she had to turn the role down. The end scene from the first film was reshot with Elisabeth Shue; however there are minor discrepancies such as a noticeable hesitation from Doc Brown when he reassures Marty that his future self is fine and Marty is wearing a watch both of these were not present in the first films end scenes.

Back to the Future Part II also produced the ‘hoverboard hoax’. On a behind the scenes featurette Robert Zemeckis had said that “hoverboards float on magnetic energy” and “they’ve been around for years, it’s just that parent groups haven’t let toy manufacturers make them. But we got our hands on some and put them in the movie”. In the film the logo for toy manufacturer, Mattel was featured on the hoverboards which caused them to receive overwhelming calls asking where they could buy one. Although they looked very convincing in the film, they were simply made from wooden boards attached to the actors feet. In order to have the appearance of hovering, the actors were suspended by cables which were removed during post-production. In an interview, Thomas F. Wilson said one of the most frequent questions he was asked was if they are real.

Upon its release the film received mixed review from critics. Roger Ebert from the Chicago Sun-Times gave the film three out of four stars. He was critical due to lacking the “genuine power of the original” but praised the film for the slapstick humour and the hoverboard in its chase sequence. Janet Maslin of The New York Times said the film is “ready for bigger and better things” and later added it “manages to be giddily and merrily mind-boggling, rather than confusing”.

Back to the Future Part II was a ground-breaking project for George Lucas’s effects studio Industrial Light & Magic. ILM used the VistaGlide motion control camera system, which allowed an actor to portray multiple characters simultaneously on-screen without sacrificing camera movement. It was nominated for an Academy Award for Best Visual Effects and won a BAFTA award for Best Special Effects. In total the film won 9 awards and received 7 nominations.

Commercially, Back to the Future Part II was a huge success. The film was produced on an estimated $40m budget and in its opening weekend release in the US took $27,835,125 in box office receipts. Overall, it grossed $332,000,000 in worldwide box office receipts which made it the 3rd highest-grossing film of 1989. 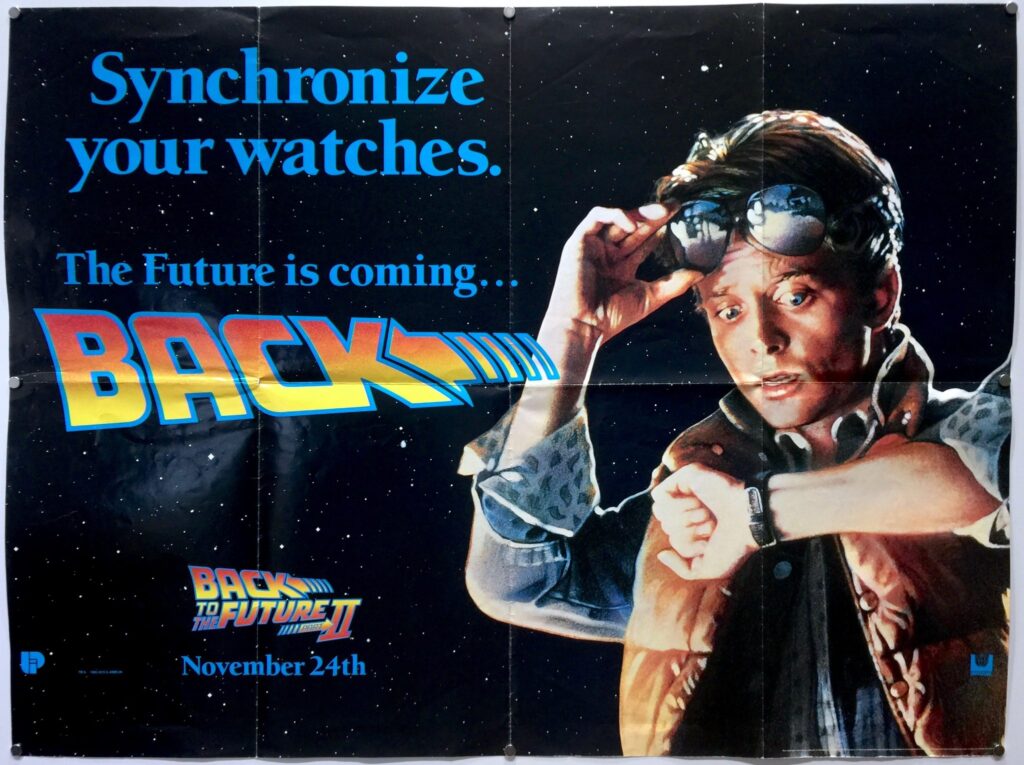