With the recent release of the slasher film, Halloween, a reboot of the 1978 classic, we explore the films that scared the living daylights out of you as a child.

Next month sees the 30th anniversary of the horror-comedy Child’s Play, which introduced the childhood-scarring Chucky to the world and featured in many a nightmares.

Also, theres a new version of Stephen King’s Pet Sematary to be released in. 2019, bringing back memories of the 1989 movie adaptation which also rattled me to the core. Sometimes dead is better they say. 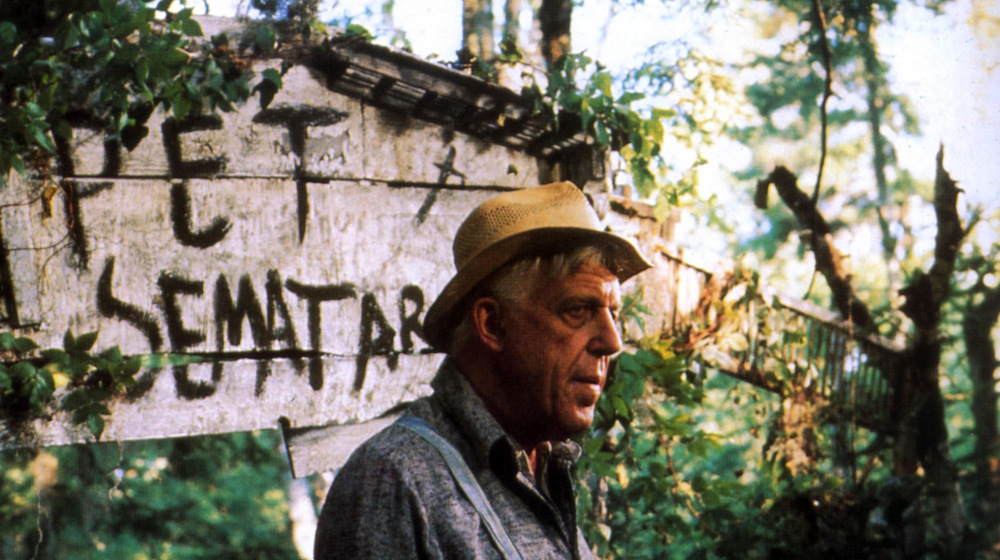 Here are some other characters from the world of movie and TV which scared people as kids. Wide and varied featuring viewing traumas, stemming from scares in supposedly child-friendly films, to movies and TV that they definitely shouldn’t have been watching in the first place. 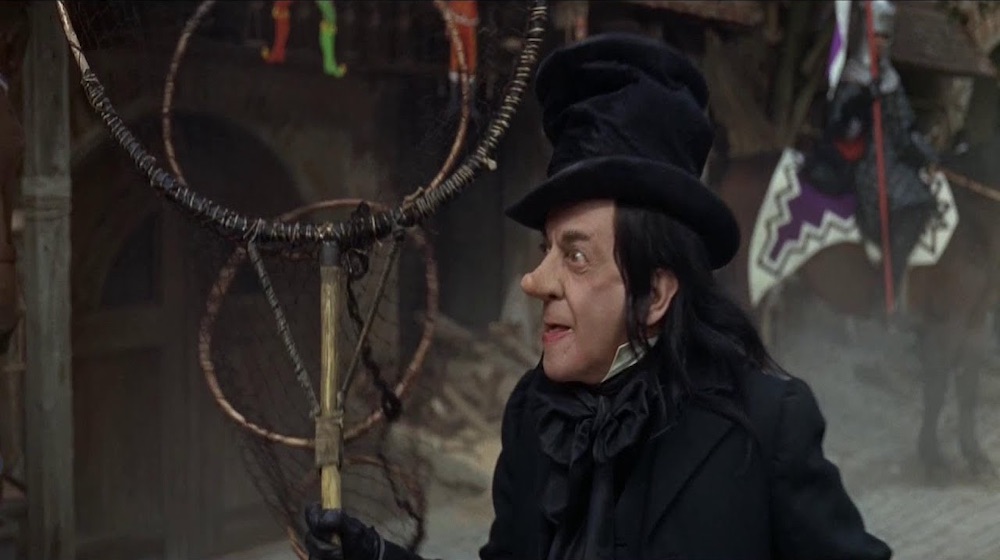 The Child Catcher (played by Robert Helpmann) from the 1968 musical Chitty Chitty Bang Bang, which has always had regular screenings on TV, perhaps explaining its power to scare multiple generations.

What kind of person would put this character in a children’s movie?!

The answer to that would be Roald Dahl, who co-wrotes the screenplay for the movie and is rumoured to have created the character. 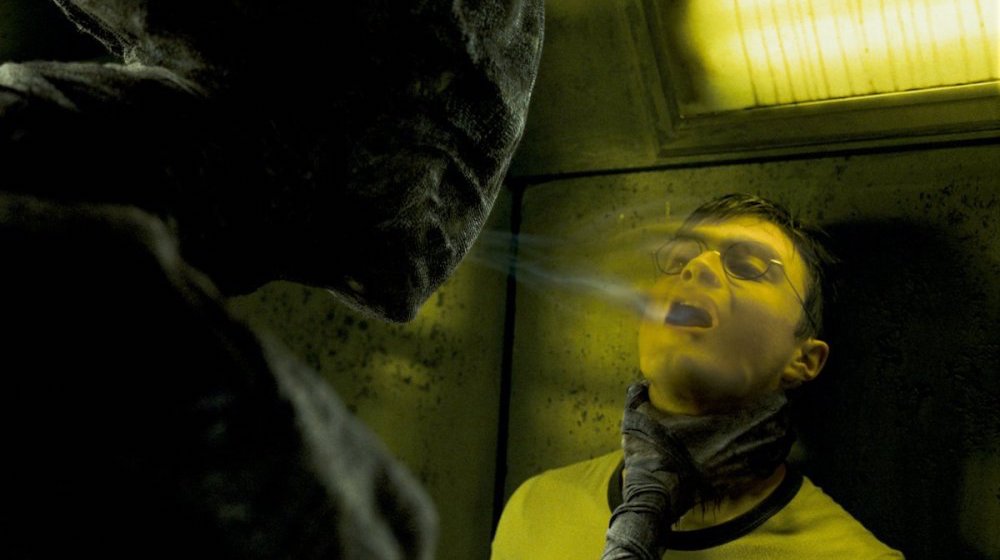 Another popular childhood-scare favourite: those joy-sucking entities, the Dementors. They are described as “soulless creatures… among the foulest beings on Earth” by J. K. Rowling. A phantom species who, as their name suggests, gradually deprive human minds of happiness and intelligence and feature heavily throughout the Harry Potter series.

They were enough to scare the pants off any adult, never mind a child!

Released in 1990, this horror-comedy stirs many emotions with people. With one saying this film was… “Designed to reduce the audience to a squirming mass, the film yields plenty of grisly pleasures”

To this day I can’t sleep with any form of spider in the house, dead or alive. The scene where the spider was in the popcorn belonging to one of the characters is something that terrifies me still 20 years later. It played on every stereotype of spiders and it worked. Even though it was meant to be a dark comedy, that element was really overshadowed by the horror of those fast, creepy, eight-legged monsters.

According to Variety, Steven Spielberg’s Amblin Entertainment and James Wan’s Atomic Monster are teaming up on a remake. Currently at the early stages of development with no director, actors, or writers yet attached. 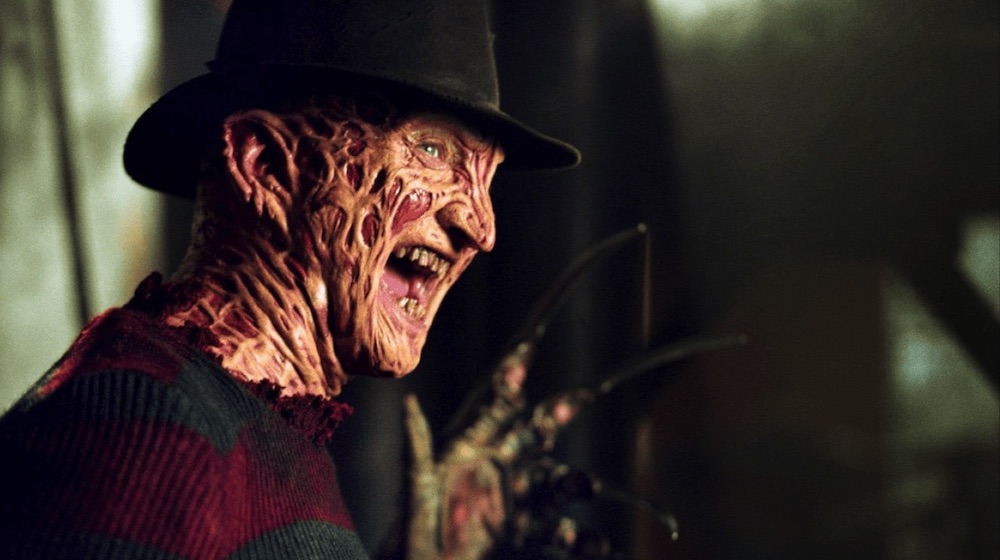 Created by Wes Craven for the 1984 release, A Nightmare on Elm Street, Freddy has gone on to achieve cult status and immortalises the ’80s slasher era.

Our babysitter and all the neighbourhood kids came in to our house to watch it. I was terrified. When they decided to watch it again and I threw a wobbler, they all left, including the babysitter! I slept in my parents’ bed for three months and still get petrified by That Man. Can’t even bring myself to type his name! 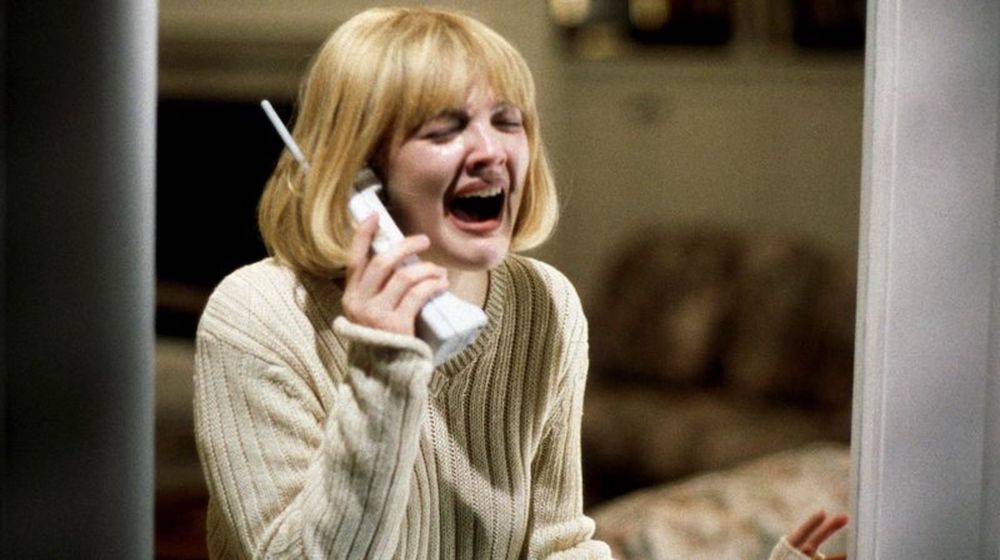 Another slasher film from Wes Craven. Following Sidney Prescott, a high school student in the fictional town of Woodsboro, California, who becomes the target of a mysterious killer known as Ghostface.

Scream came out when I was 10. The opening bit is the worst – where Drew Barrymore is in the house on the phone, and there’s the patio doors with darkness outside. Then the outside lights come on to show the guy tied up. I still get scared of patio doors when it’s dark outside. 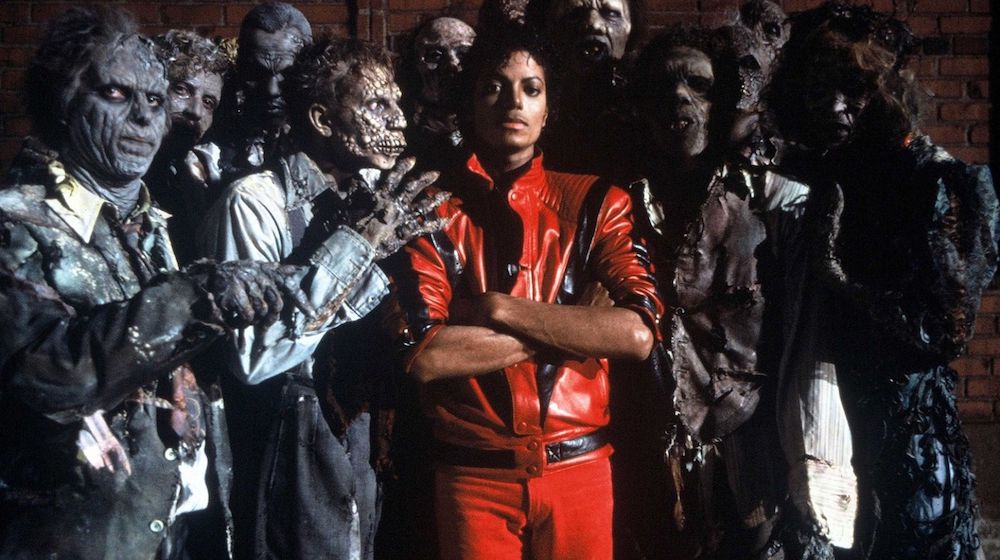 Michael Jackson’s Thriller is a music video which features, Jackson and his girlfriend (played by Ola Ray) being confronted by zombies while walking home from a cinema. Jackson himself becomes a zombie and performs a dance routine with a horde of the undead. Featured within the video are numerous references to horror films.

My sisters were older than me, so I used to catch a lot of music videos when I was young, I loved Michael Jackson, and even had a poster of him on my wall. One evening I walked in when Thriller was on TV. The end bit when MJ turned around with the evil eyes scared the hell out of me! I hid behind the couch and wouldn’t sleep that night until my dad came into my room and took down the MJ poster! 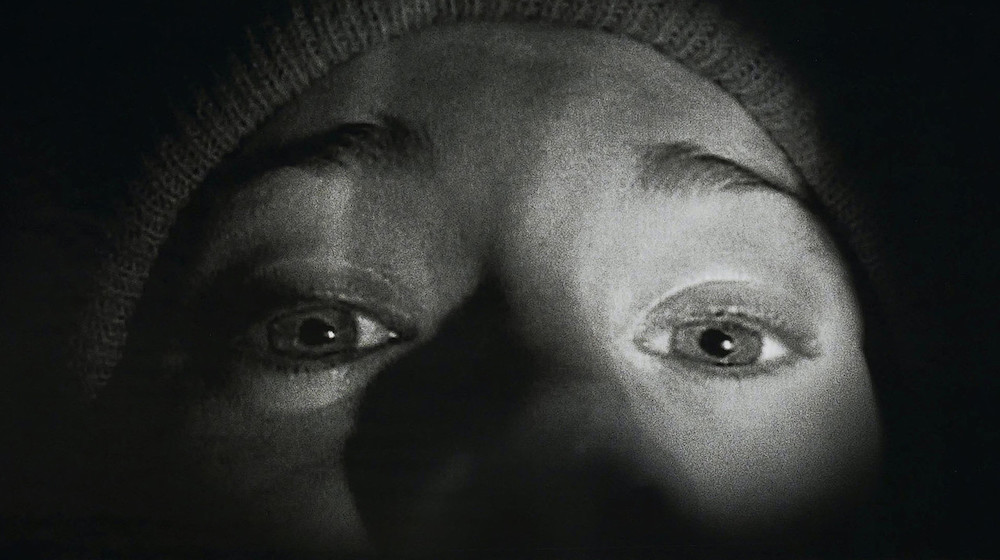 A supernatural horror film from 1999 and tells the fictional story of three student filmmakers who hike in the Black Hills near Burkittsville, Maryland in 1994 to film a documentary about a local legend known as the Blair Witch. The three disappeared, but their equipment and footage is discovered a year later. The purportedly “recovered footage” is the film the viewer sees.

I was a young teen and my parents decided to leave me home alone for the first time when they went out for dinner, it was on telly and I decided to be a ‘big boy’ and watch a scary movie. Being a youngster, I thought it was a factual documentary, not a scripted movie. I was horrified, and couldn’t walk up the stairs the right way round for months. 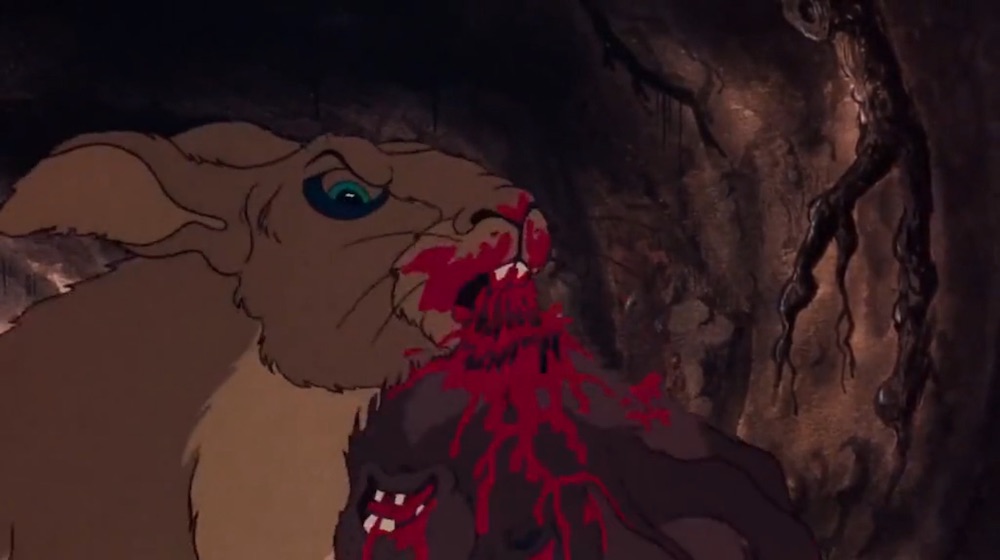 The Chief Rabbit of Efrafa serves as the main antagonist in the novel, film and television series. Fearless, single-minded, and brutally efficient, Woundwort was orphaned at a young age; his father was shot dead by a human and his mother was killed shortly afterwards by a weasel.

Still can’t watch that all these years later. 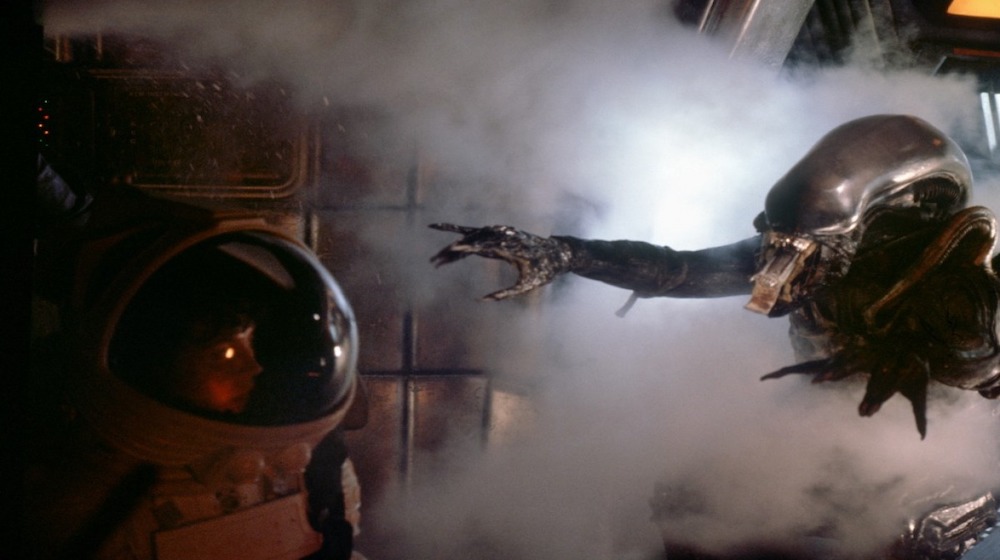 This sci-fi horror film originally released in 1979, follows the crew of the commercial space tug Nostromo who encounter the eponymous Alien, a deadly and aggressive extraterrestrial set loose on the ship.

I used to live in the countryside and my parents used to make me take the bins down (in the dark) to the gates. They always said that if I didn’t hurry up, the aliens would get me! 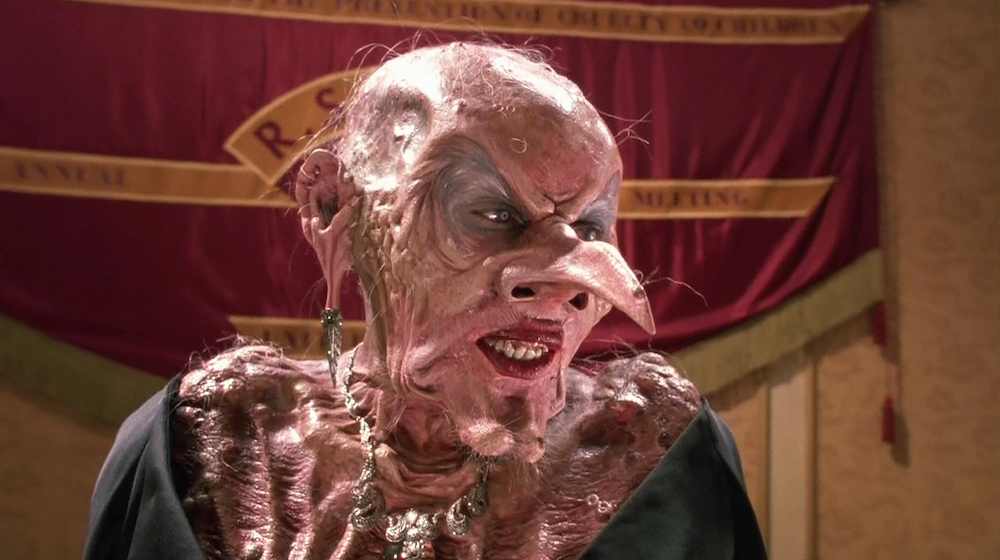 This dark fantasy horror-comedy film is based on the 1983 children’s novel by Roald Dahl, features evil witches who masquerade as ordinary women and kill children.

They were able to smell children. And children smelled like poo. Terrifying.

The Daleks (Doctor Who) 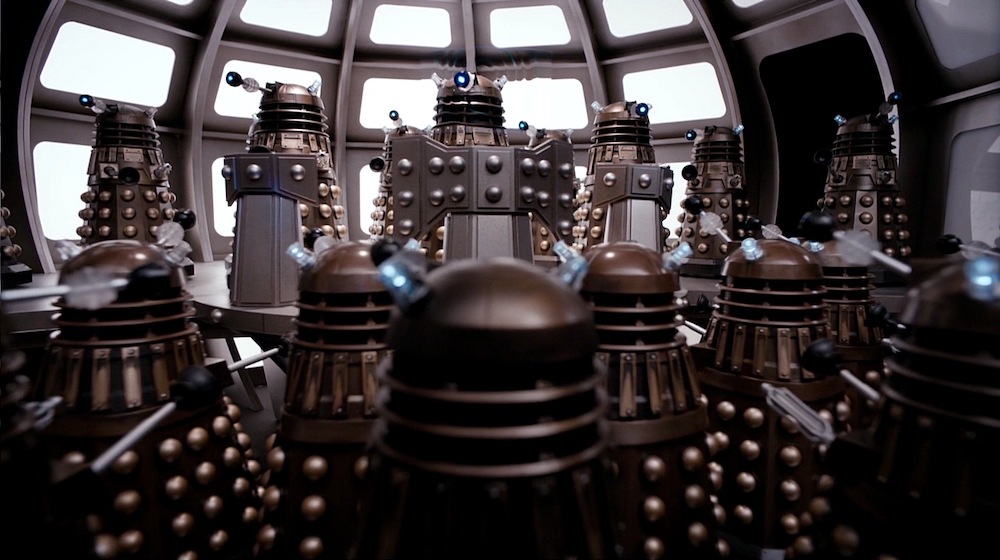 The Daleks are violent, merciless and pitiless cyborg aliens, who demand total conformity to their will, bent on the conquest of the universe and the extermination of what they see as inferior races.

The Daleks terrified me as a kid. I was scared of them because they always looked like they were just about to shoot you, but when they roared ‘EXTERMINATE’, I would run out of the room and not come back until the show had finished. Absolutely terrified me! 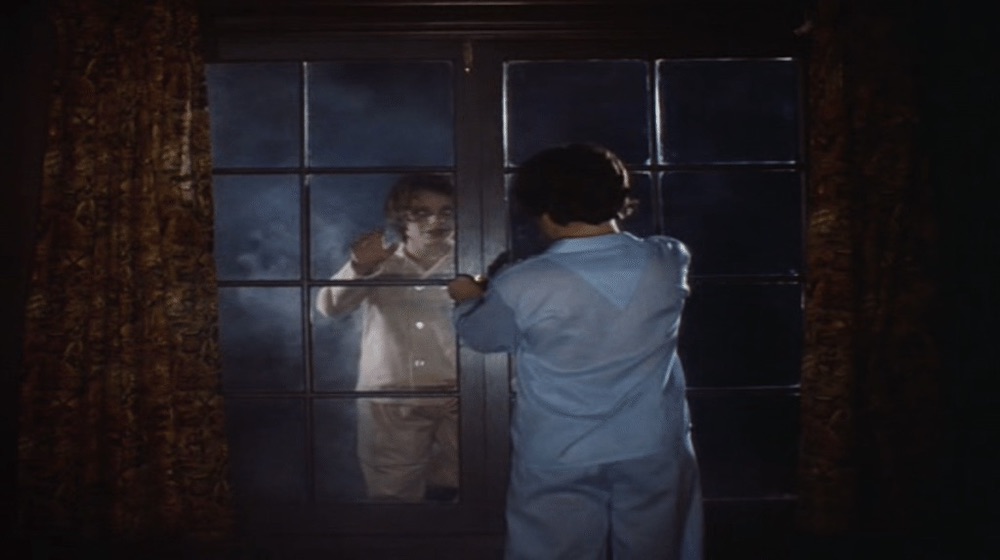 A mini-series adaption produced for TV and based on the horror novel by Stephen King, follows a writer who returns to his hometown and discovers that its citizens are turning into vampires. Salem’s Lot combines elements of both the vampire film and haunted house sub-genres of horror.

The vampire boy that scratches at the window…

What films that scared the living daylights out of you as a child, let us know in the comments below.