Movie posters are a powerful visual element that promotes a film’s themes and narrative. Movie posters for a long period of time were a significant part of the film industry and vital for advertising. Before the digital age, movie posters were important for circulating a film star’s persona and embodying a film’s cult status. 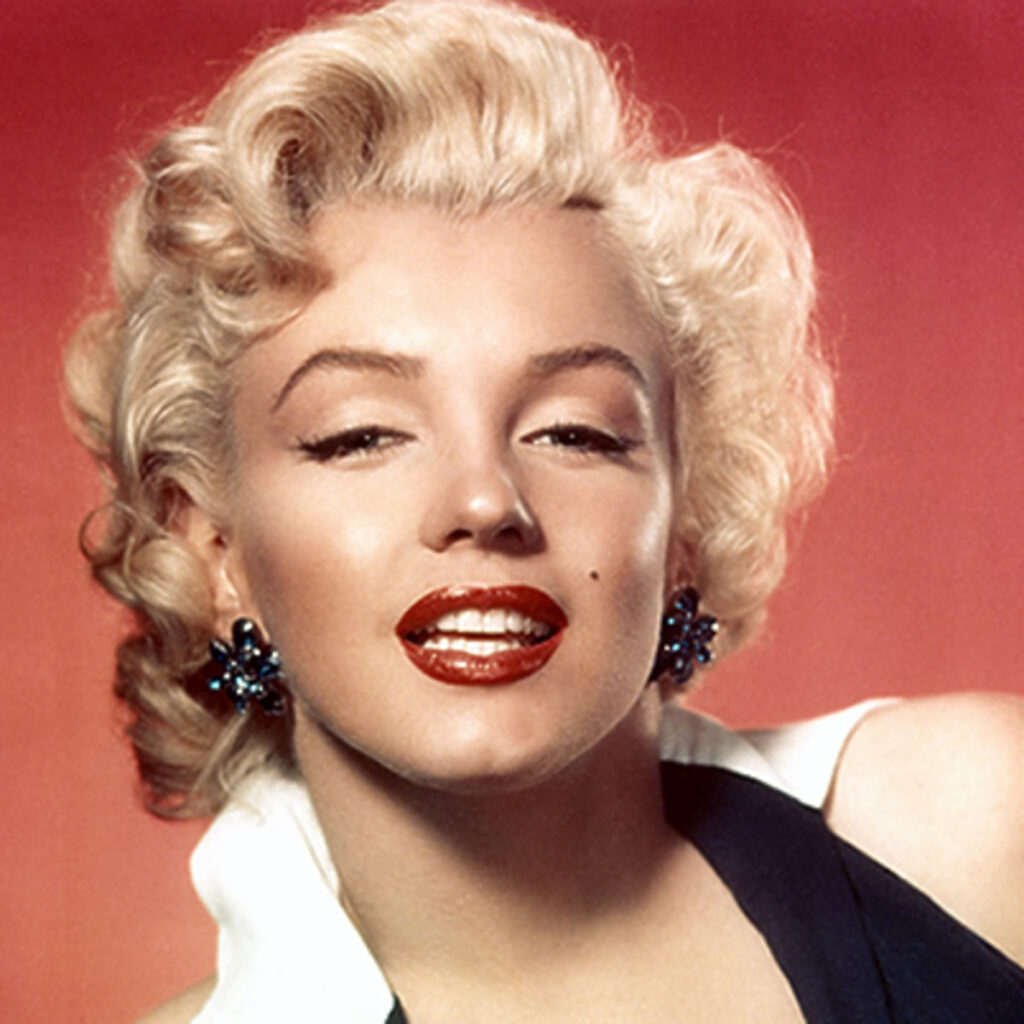 The use of Charlie Chaplin and Marilyn Monroe, major film stars in their day, are prime examples of how movie posters reflected star power. 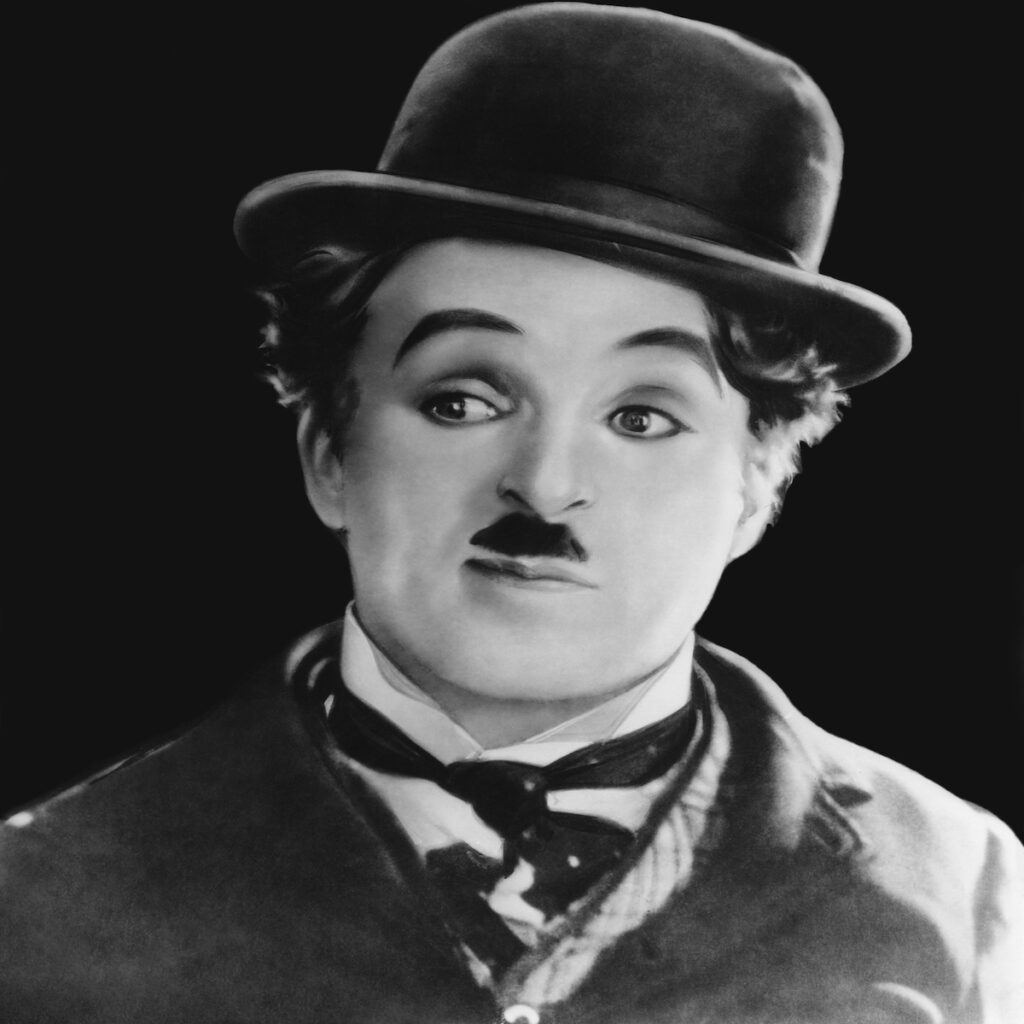 Cult films like Scarface and Night of the Living Dead with their dedicated fans, seek out movie posters as a way of owning part of their passion. However, could the movie poster become obsolete in today’s digital age.

From the inception of cinema to television’s emergence in the 1950s, printed media was the dominant form of mass advertising. Print media’s vast circulation had the ability to engage the public with the advertised content. Gordon Gorey, an advertising expert, stated this period was a transition from “sound-oriented beings to primarily visually-oriented” society.

Gorey’s statement reflects that movie posters were a sufficient form of advertising, as seen in the ‘Biograph Girls‘ popularity. The ‘Biograph Girls’ were Florence Lawrence and Mary Pickford, whose films were a must-see for audiences. Movie studios originally refused to give advertising credit to the actors or actresses, so they would not have to pay extra wages. Yet, Biograph Studios began to understand that exploiting their actresses’ popularity through advertising meant securing extra profits. 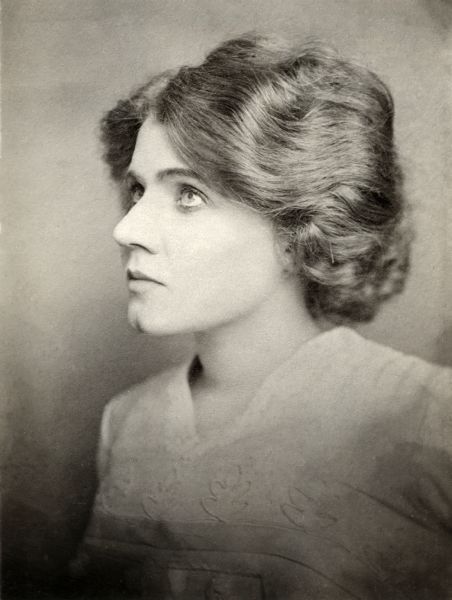 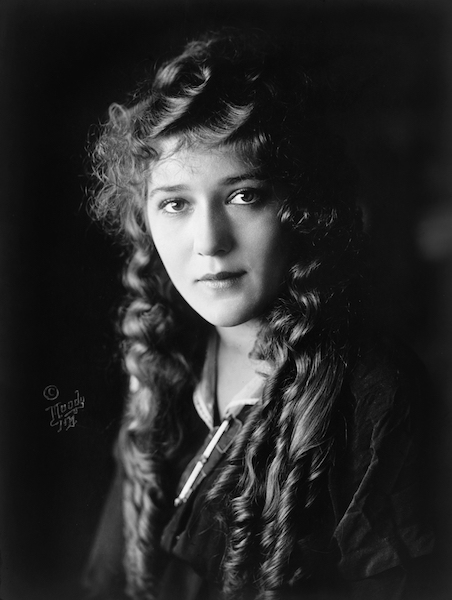 Sarah Projansky analysed that Lawrence and Pickford’s advertising appeal was due to “the concept of the girl was a marketing tool in the early star system”. Projansky linked the ‘Biograph Girls’ popularity transcending into successful advertising explains how print media became important for the film industry. The constant use of ‘Biograph Girls’ circulating through print media became part of establishing a movie star system, where the film industry manufactured movie stars to match their on-screen personalities. Biograph Studios’ commercial actions also gives substance to Gorey’s analysis of this time period, showing how the film industry was taking advantage of mass media by targeting their audience in specific ways.

PUBLICITY FOR THE FILM STARS

As cinema progressed into a vastly defined medium, it meant movie posters were essential in reflecting a film star’s personality. The character played by Charlie Chaplin in The Tramp was widely beloved in its day. Modern Times was Chaplin’s first cinematic release after a five-year interval. This had been due to a creative turbulence in Chaplin’s career, causing media debate. This made Modern Times highly anticipated, so it was important for the movie poster to engage with the audience. 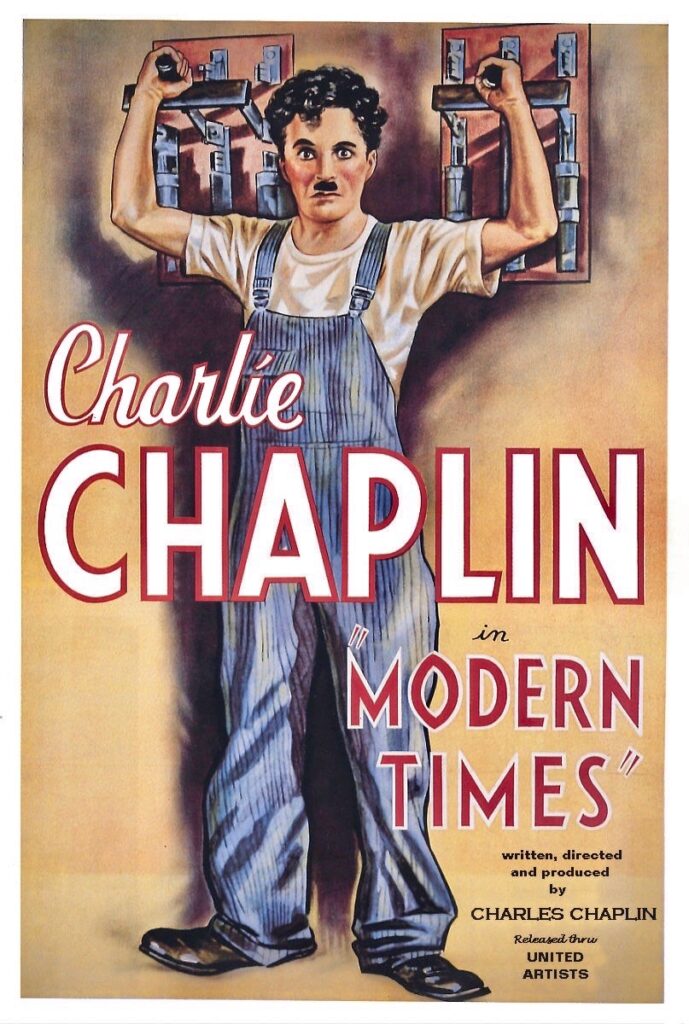 The image shown in The Tramp highlights the character in a characteristic mannerism, along with Chaplin in capital letters, was likely to engage film goers’ minds. This refers back to Gorey’s viewpoint regarding society becoming more visual-orientated, as use of The Tramp iconography can be seen as essential in attracting Chaplin’s audience. Critical reviews of Modern Times reflects the success of the film’s advertising, with New York Times critic Frank Nugent saying “time has not changed this genius”. This supports how The Tramp iconography is prevalent in the film poster and narrative.

Marilyn Monroe, both in her film career and public life, was constantly personified through her sultry persona. The Seven Year Itch made use of Monroe’s sexuality in an iconic scene over a subway grate, shown in its film poster. The film poster presents the audience with this sensual image, coinciding with the film’s title. This could be interpreted as a attention-grabbing ploy to make audiences immediately take notice. 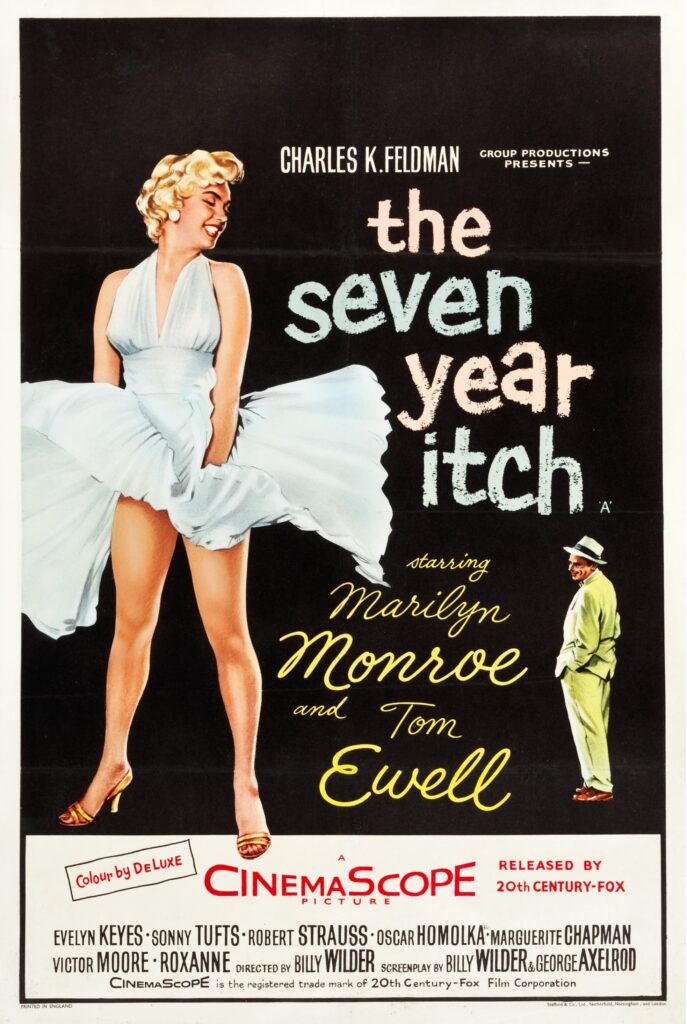 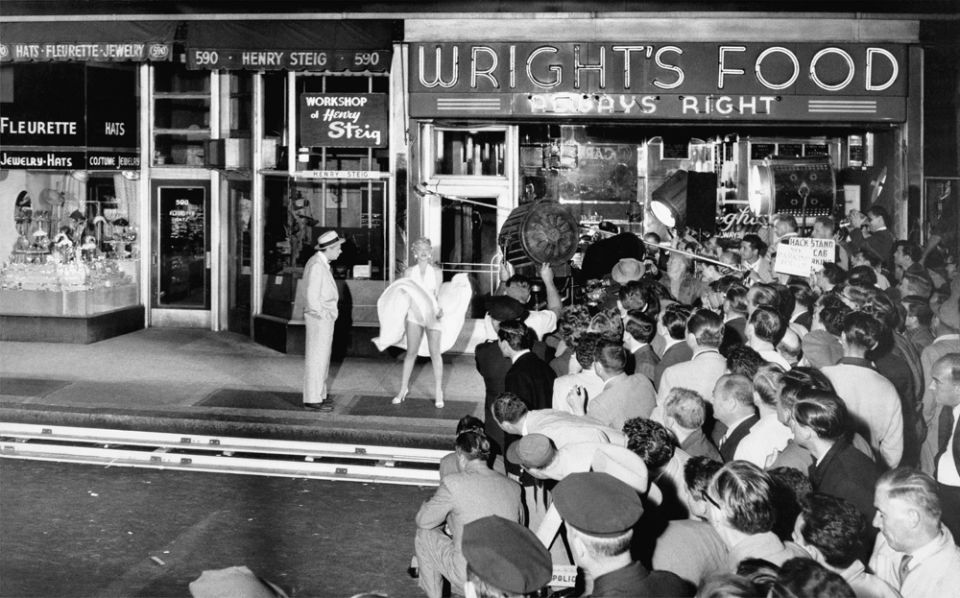 Cult films are defined as containing a dedicated fanbase, which has developed a subculture engaging repeated viewings, quoting dialogue, and other forms of audience participation. Scarface is such a film, which has become legendary in popular culture for its frequently quoted dialogue and scenes of violent excess. Scarface related merchandise has become collectable for avid fans, including movie posters due to its recognition as a landmark in the gangster genre. 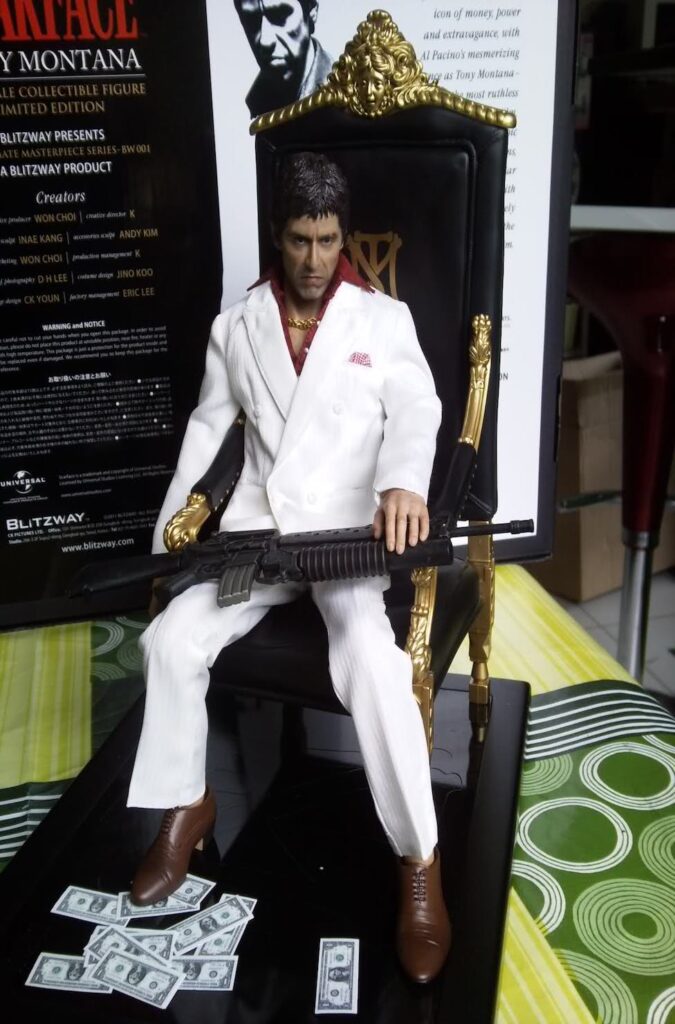 The movie poster image symbolises Scarface’s cult following. One interpretation of the black and white background can be a metaphorical battle between good and evil. Scarface fans could possibly see the good versus evil symbolism as Montana’s internal struggle, therefore the movie poster reflects his personality. Montana’s personality is part of Scarface‘s cult image, explaining why the film poster could have a sense of glamour for Scarface fans. 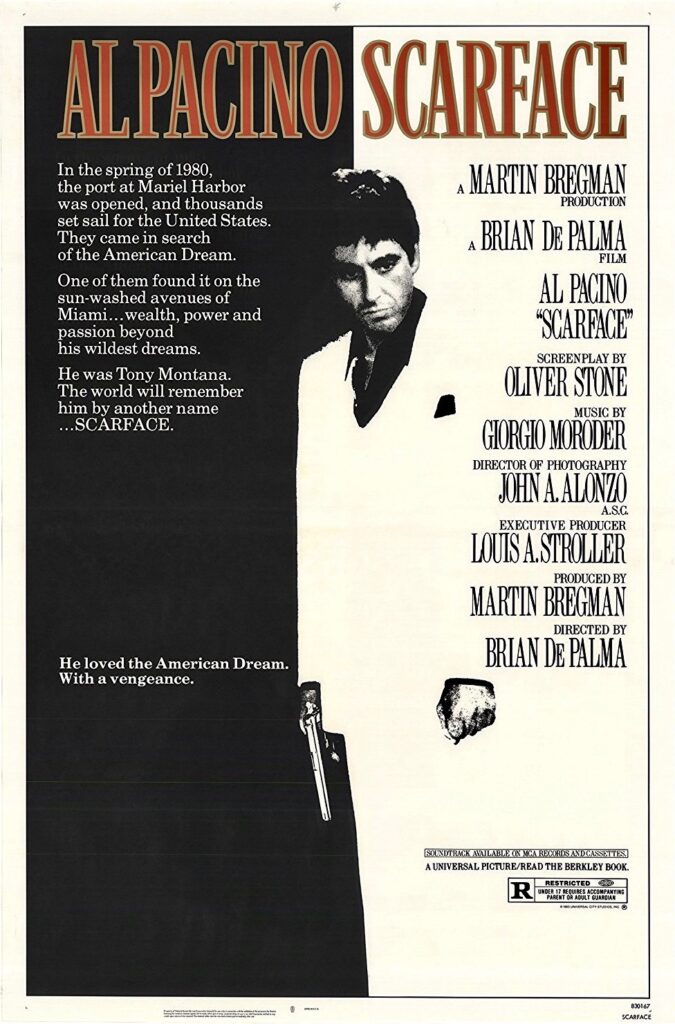 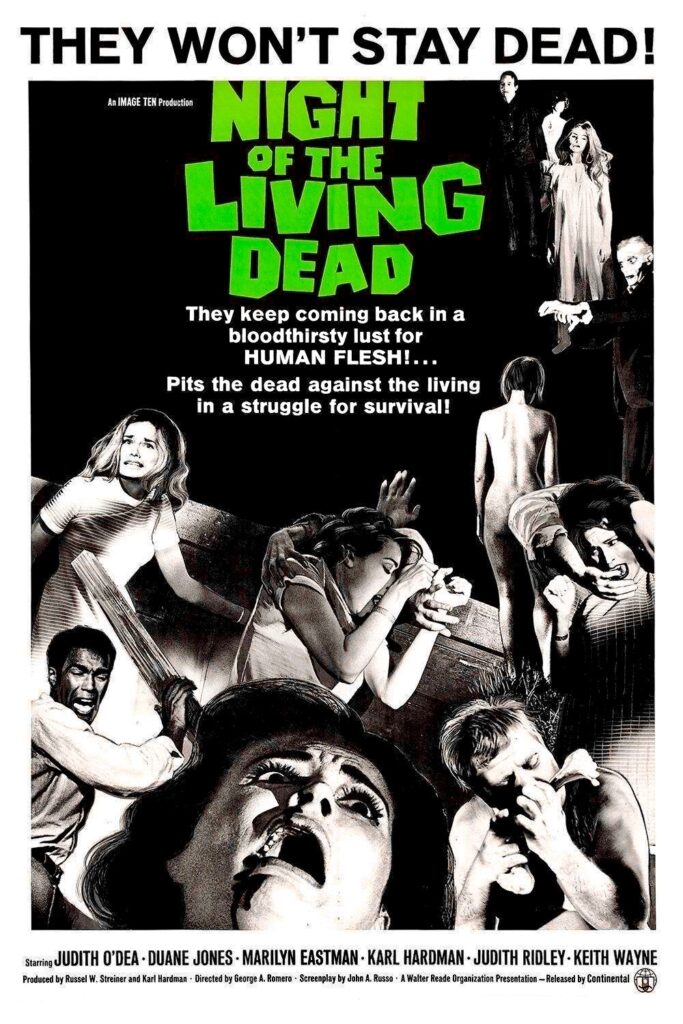 THE DECLINE OF THE MOVIE POSTER?

As modern printing and distribution costs continue to rise for movie posters, many movie studios are choosing to promote their films through television and the internet. We have seen digital media start to overtake printed media. Although both share similarities in their fundamental aims, digital media has the capability to reach and attract a far bigger audience.

Digital media can be presented in a variety of formats such as social media portals such as Facebook, Twitter, Instagram, through the movie studios own websites, through film-oriented websites like IMDb (owned by Amazon and has over 60m users) and magazines like Empire (mass-circulated, commercial film magazine) contain advertisements which link to a film’s trailer and/or promotional website and can reach a global mass market. With internet usage globally surpassing over three billion users – around 40% of the world’s population – and with 50% of internet usage based on searching, it makes a clear statement as to why movie studios have chosen to focus on digital markets.

Through the use of film-oriented websites like IMDb trailers and other promotional material can be placed readily and easily accessible to the masses. It offers the movie studios an opportunity to place a wealth of information that just cannot be placed on a movie postersuch as scenes from a specific film or includes additional information i.e. local cinema listings. These are advantages which have consolidated digital marketing above print media.

As well as utilising digital media on the internet, many cinemas are now going ‘digital’ by replacing the traditional back-lit movie poster frames with digital video screens. Digital movie posters offer the ability to show movie trailers, animated stills or simple animations to tease the movie goers and generate excitement. The panels can be rotated to show multiple movies in one frame thus eliminating the need for a single framed movie poster. I would expect autostereoscopic displays to be used in the future, depending upon how quickly the technology can be developed, which will provide 3D images without the need for any special headgear or glasses.

As discussed, movie posters have been powerful visual aids utilised in the promotion of the film’s using themes and narratives. Analysing movie posters in relation to major film stars and cult films, they had the ability to express the movies characteristics, reflected the actors or actresses iconic statuses that were instantly recognisable with audiences and cult films which contained familiar attributes which devotees of the titles. Despite this, the movie poster industry is becoming increasingly dominated by digital marketing rendering paper formats obsolete. Digital marketing has the ability to contain far more information, in various different formats and can be instantly updated; this is unmatched by a printed movie poster.

Will this mean the demise and eventually end of the paper movie poster? Will this mean that those uniquely designed iconic masterpieces will no longer be available in a paper format? Ultimately, who knows but with a world more focused on technology and rumours that some studios are already limiting the print runs of movie posters, it could. However, the artistic creativity used to develop these posters will continue whatever the medium used to deliver the material, as it remains an important aspect for movies that strive for originality and artistic quality.