A Bridge Too Far is a 1977 film directed by Richard Attenborough. It was co-produced by Joseph E. Levine and Richard P. Levine. The screenplay was written by William Goldman based on the 1974 novel of the same name by Cornelius Ryan. A Bridge Too Far features an all-star cast of Dirk Bogarde, James Caan, Michael Caine, Sean Connery, Edward Fox, Elliott Gould, Anthony Hopkins, Gene Hackman, Hardy Krüger, Laurence Olivier, Robert Redford, Maximilian Schell and Liv Ullmann.

The storyline tells the story a failed mission during World War II called Operation Market Garden. It was intended that the Allies would break through the German lines and seize several bridges in occupied country, Netherlands including one located in Arnhem. The objective of the mission was to outflank the German force to bring an end to the war by Christmas 1944.

The name for the film, A Bridge Too Far came from a comment attributed to British Lieutenant-General Frederick Browning, who was deputy commander of the First Allied Airborne Army. He is alleged to have told Field Marshal Bernard Montgomery, before the operation “I think we may be going a bridge too far”. This was in reference to the intention of seizing the Arnhem bridgehead over the river Rhine.

Filming for A Bridge Too Far took mainly took place in the Netherlands using the dutch province of Gelderland. The towns of Nijmegen, Bronkhorst and Bemmel were used along with De Graaf in North Brabant. The Moor Park Golf Club in Hertfordshire, UK was used with Twickenham Film Studios in Middlesex, UK. The scenes for the Arnhem bridge assault were filmed in Deventer in the Provence of Overijssel, Netherlands as a similar bridge over the IJessel river was still available. A replica bridge was built in Arnhem but by the mid-1970s it is surrounded by a urban backdrop and could not be used to portray a 1940s city.

The scenes for the air drops involved 1,000 men together with a series of supply drops from Dakota aircraft. Eleven Dakota aircraft were purchased and four were lent for the duration of the parachute filming by the Finnish Air Force. Ten replica Horse gliders were built, however a storm damaged most of them and seven were repaired for the shoot. Unfortunately, they were tail-heavy and required a support post under the rear fuselage, with clever camera angles being employed to prevent revealing this during filming.

When A Bridge Too Far was released it received mixed reviews. On Rotten Tomatoes the film holds a 65% rating, with IMDb rating the film 7.4 our of 10. The consensus among the critics found the film to be impressively staged and historically accurate, although many found it too long and repetitive. James Caan and Anthony Hopkins were praised for their excellent performances. It was claimed in a documentary that at the time of its release “the film was shunned by American critics and completely ignored at Oscar time for daring to expose the fatal inadequacies of the Allied campaign.”

Commercially, A Bridge Too Far was a success. Having been produced on an estimated production budget of $25m, it grossed $50,800,000 in US box office receipts. Considering the use of an all-star cast, the cost was kept low as they agreed to work on a ‘favoured-nation’ basis, where they would all receive the same weekly fee of $250,000. 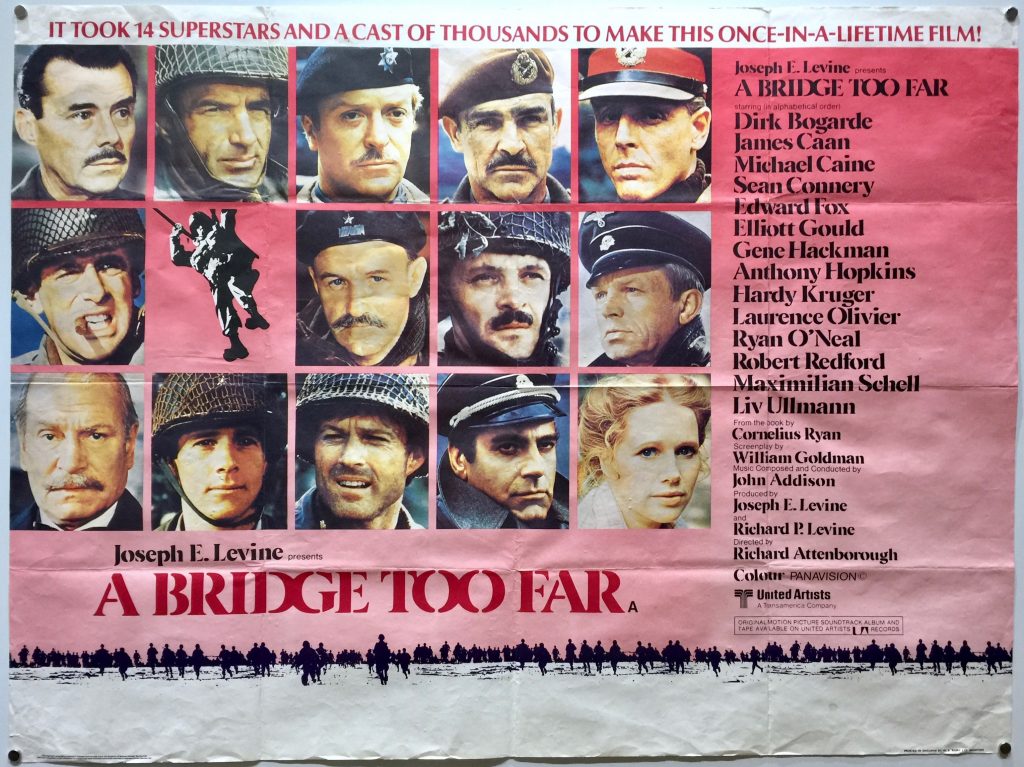