The film is based on the actual events of an incident on Hill 192 during the Vietnam War in 1966. The incident refers to the kidnap, gang rape, and murder of Phan Thi Mao, a young Vietnamese woman on November 19th, 1966 by a group of American soldiers. The primary sources for the screenplay was an article written by Daniel Lang for The New Yorker in 1969 and a subsequent book he wrote. However, all the names and some details of the story were altered for the film.

In 1979, David Rabe pitched the idea of the film to Brian De Palma, who was interested but unable to raise the capital needed to finance the film. Later Rabe had written the script and De Palma lined up Michael J. Fox and Sean Penn to star. Together they nearly succeeded in getting the film financed by Paramount but they decided not to proceed when the budget increased from $17m to $20m. Brian De Palma left the project to direct The Untouchables, a commercially successful film. A former studio boss had left her role at Paramount and moved to Columbia Studios where she gave the go-ahead for Casualties of War.

Principle photography was filmed mostly on location in Thailand with some follow up photography completed in San Francisco. The bridge scenes were filmed in Kanchanaburi, Thailand, which was the same as used on Bridge on the River Kwai.

Upon its released, Casualties of War, was received well by film critics. Steven Spielberg was invited to a private screening of the film and said to Columbia Pictures executive Dawn Steel “You’ll be thinking about this for a week”. Quentin Tarantino hailed the film as “the greatest film about the Vietnam War”. However, it was not commercially successful and struggled to recoup its estimated budget of $22,500,000 and made $18,671,317 in US box office takings. 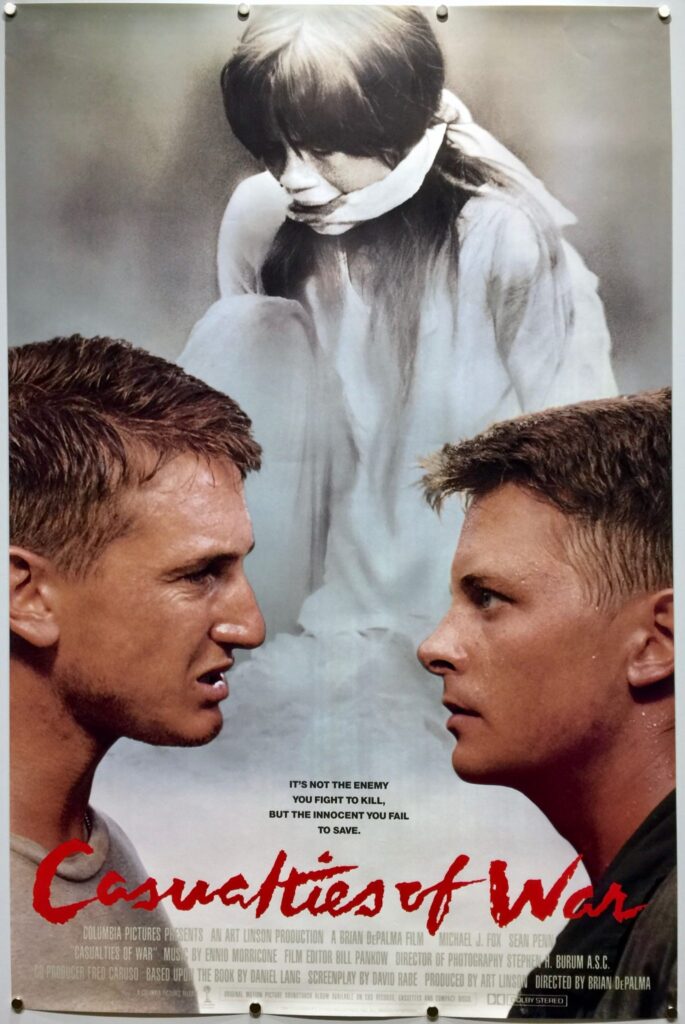 Type of Poster
One Sheet
Style of Poster
International
Origin of Poster
USA
Year of Poster
1989
Designer
Unknown
Artist
Unknown
Size (Inches)
41″ x 27″
NSS # / Printer Markings
None
Tagline
It’s not the enemy you fight to kill, but the innocent you fail to save.