Fede Alvarez admitted that making this film was a reaction to some of the criticisms he had received for his first film, Evil Dead. The criticism were focused on the level of blood, the attempts to shock the audience and ultimately a re-make.

In contrast he wanted Don’t Breathe to have less blood with more focus on suspense rather than shock. He didn’t want the film to have a supernatural theme due to his belief that it was trendy. Instead he chose their adversary to be blind which was deliberate in order to make the Blind Man character original and unique. Fede Alvarez explained “Sometimes you naturally give them powers and make them more menacing than a normal person, so we thought what if we do the other way around and take his eyes out and make him a blind person”.

Fede Alvarez called Don’t Breathe an exercise in reversal meaning he wanted to move away from the stereotypical scenes in horror movies such as having a scary house on a home street or for a home invasion story that is told from the point of view of the invaders.

Don’t Breathe received positive reviews from critics and movie goers alike. It was a commercial success and at the box office earned $153,219,180 worldwide against a production budget of $9.9m. 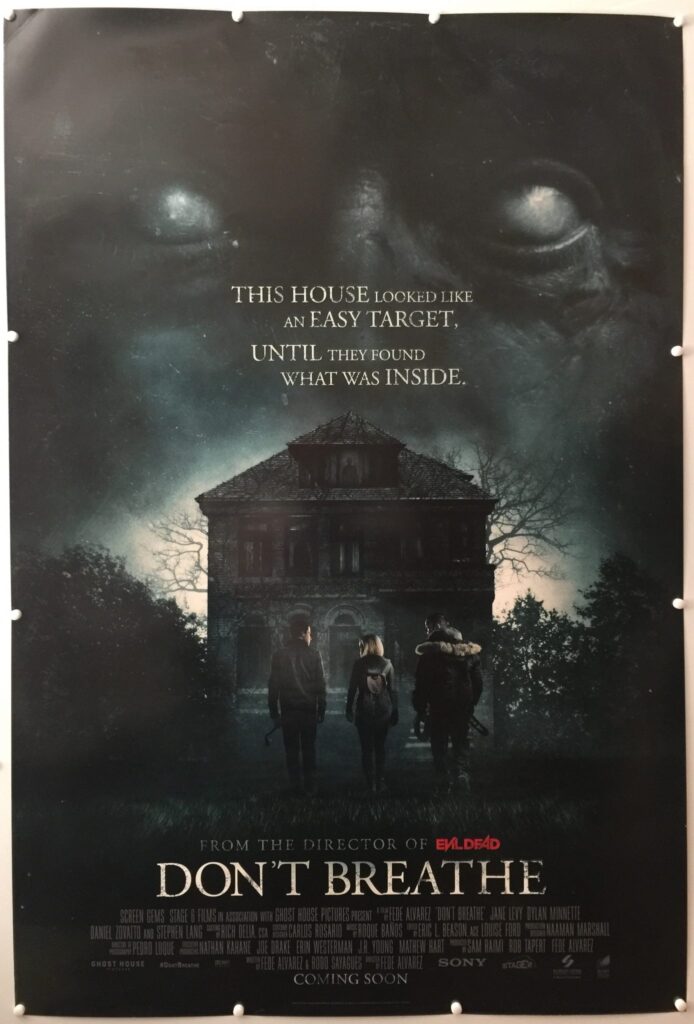 Type of Poster
One Sheet
Style of Poster
Advance
Origin of Poster
UK
Year of Poster
2016
Designer
Cold Open
Artist
Unknown
Size (Inches)
40″ x 27″
NSS # / Printer Markings
None
Tagline
This house looked like an easy target, until the found what was inside