The storyline is set around an inventor’s greatest creation, Edward a near-complete person. However, the inventor died before he could finish Edward’s hands; instead, he is left with metal scissors for hands. At first, everyone welcomes him into the community and he is taken in by a suburban family but soon things begin to take a change for the worse.

Tim Burton conceived the idea for Edward Scissorhands from his childhood upbringing in suburban Burbank, California. During pre-production of Beetlejuice, Caroline Thompson was hired to adapt Burton’s story into a screenplay.

Principle photography was completed in the Tampa Bay Area of Florida, including the town of Lutz and the Southgate Shopping Center of Lakeland. When looking for possible suburban neighbourhoods to locate filming Burbank, California was considered but was discounted as Tim Burton believed the city had altered too much since his childhood.

Bo Welch, the production designer of Edward Scissorhands described Lutz as “a kind of generic, plain-wrap suburb, which we made even more characterless by painting all the houses in faded pastels, and reducing the window sizes to make it look a little more paranoid”. They repaint each of the houses in one of four colours, which he described as “sea-foam green, dirty flesh, butter, and dirty blue”.

When Edward Scissorhands was released it received positive reviews from the critics and audiences. On Rotten Tomatoes it currently holds a rating of 89% with the general consensus being, “The first collaboration between Johnny Depp and Tim Burton, Edward Scissorhands is a magical modern fairy tale with gothic overtones and a sweet centre”.

Marc Lee from The Daily Telegraph scored the film five out of five stars, writing, “Burton’s modern fairy tale has an almost palpably personal feel: it is told gently, subtly and with infinite sympathy for an outsider who charms the locals but then inadvertently arouses their baser instincts.” whilst additionally adding praise to Depp’s performance, “[Depp] is sensational in the lead role, summoning anxiety, melancholy and innocence with heartbreaking conviction. And it’s all in the eyes: his dialogue is cut-to-the-bone minimal”.

Commercially, Edward Scissorhands was a box office success. Having been produced with an estimated production budget of $20m. In its opening weekend, it took $6,325,249 at the US box office and took $86,024,005 in total worldwide box office receipts. 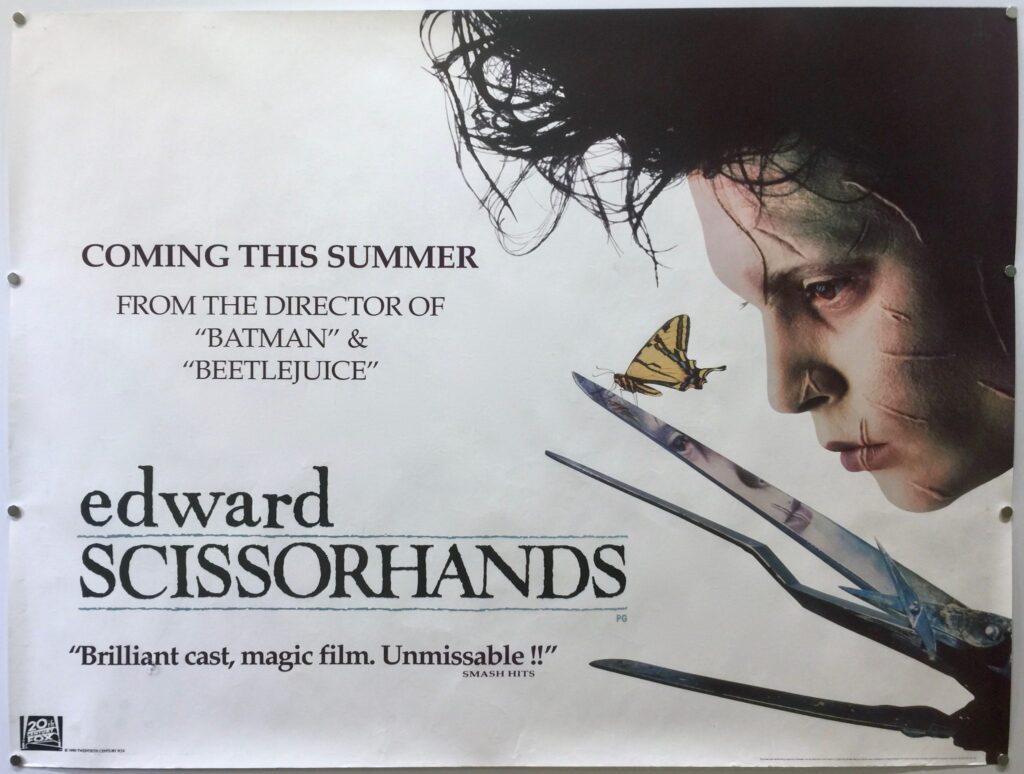