The Goonies is a 1985 film directed by Richard Donner who co-produced the film with Harvey Bernhard. The screenplay was written by Chris Columbus and is based on the story by Steven Spielberg. It stars Sean Astin, Josh Brolin, Jeff Cohen, Corey Feldman, Kerri Green, Martha Plimpton, Jonathan Ke Quan, Anne Ramsey, Robert Davi, Joe Pantoliano and John Matuszak.

The storyline follows a group of friends who call themselves The Goonies. One night they are all in Mikey’s attic and stumble across an old map which shows the location of the lost treasure. The map highlights the location of millions of dollars worth of gold which would be enough to save their homes from closure. However, what they don’t know is that a trio of Italian criminals is also trying to grab hold of the gold.

In the documentary, The Making of The Goonies, director Richard Donner noted the difficulties and pleasures of working with so many child actors. He praised them for their energy and excitement but says that they were unruly when brought together. The documentary frequently shows him coaching the young actors and reveals some techniques he used to get realistic performances.

One trick involved One-Eyed Willy’s ship, which was actually a full-sized mock-up of a pirate ship. Richard Donner prevented the child actors from seeing the ship until they filmed the scene wherein it is revealed to their characters. The characters’ first glimpse of the ship was thus also the actors’ first view of it, bringing about a more realistic performance. However, that particular scene in the movie is actually the second take, as the cast was so overwhelmed at first sight that the scene had to be re-shot. It was later noted that the entire set was scrapped after shooting because they could not find anyone who wanted it.

Principle photography was filmed in and around Astoria, Oregon. The interior and exterior of the old Clatsop County Jail feature as the holding place of Jake Fratelli at the start of the film. (The building was later converted into the Oregon Film Museum, which opened on the 25th anniversary of The Goonies with memorabilia from this and other local films). The Walsh family home is a real home on the eastern end of the town. The scenes along the coast were filmed in Oregon, but they were a considerable distance from Astoria.

Underground scenes were filmed at Warner Bros. Studios in Burbank, California, including the cavernous set where the Goonies find One-Eyed Willy’s ship, which was in Stage 16, one of the largest sound stages in America. The final scene was shot at Goat Rock State Beach in Sonoma County, California.

On Rotten Tomatoes it currently holds a rating of 70% with the general consensus being, “An energetic, sometimes noisy mix of Speilbergian sentiment and funhouse tricks that will appeal to kids and nostalgic adults alike.”

Commercially, The Goonies was a huge box office success. Having been produced with an estimated production budget of $19m, it took $9,105,913 in its opening weekend at the US box office and has taken $61,503,218 in total US box office receipts. 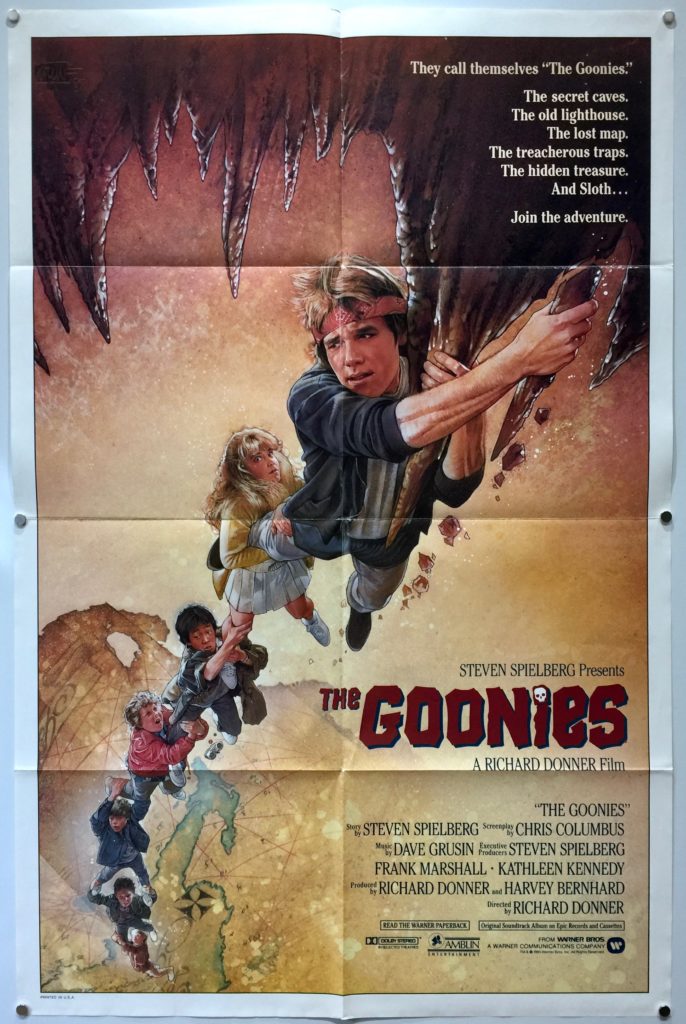