Gremlins 2: The New Batch is a 1990 film directed by Joe Dante with Chuck Jones directing the animation. It was produced by Michael Finnell with Charles S. Haas writing the screenplay. The Gremlins films are based on characters created by Chris Columbus. Gremlins 2: The New Batch is a sequel to the 1984 film Gremlin. It stars Zach Galligan, Phoebe Cates, John Glover, Robert Prosky, Haviland Morris, Dick Miller, Jackie Joseph, Robert Picardo and Christopher Lee. The film features Tony Randall and Frank Welker providing the voices for two gremlins.

The storyline continues the adventures of Gizmo (once again voiced by Howie Mandel), who spawns numerous small monsters when wet. In the first film, Gizmo’s offspring rampaged through a small fictional town. In Gremlins 2, Gizmo multiplies within a skyscraper in New York City. The new creatures thus pose a serious threat to the city should they be able to leave the building, and much of the story involves the human characters’ efforts to prevent this disaster.

As with the first film, Gremlins 2 is a live action horror comedy film; however, there is animation by Chuck Jones in the film featuring the Looney Tunes characters Bugs Bunny, Daffy Duck and Porky Pig (who are now voiced by Jeff Bergman, due to the death of Mel Blanc, the original voice actor). Jones had actually quit animation before returning to work on Gremlins 2. Dante explained the animation at the beginning of the film was meant to “set the anarchic tone.” The film is meant to be more cartoon-like and less dark than the original, and the violence is fairly slapstick. There are also a number of parodies of other films and stories, most notably Gremlins itself, as well as the Rambo films, The Wizard of Oz, Marathon Man and The Phantom of the Opera.

The original Gremlins was a financial success, and Warner Bros. asked its director Joe Dante to make a sequel straight away. Dante declined, because he saw Gremlins as having a proper ending, and thus a sequel would only be meant to be profitable. Moreover, the original film was a taxing experience for Dante, and he wanted to move on. Work on Gremlins 2 continued without him, as the studio approached various directors and writers. Storylines considered included sending the gremlins to cities like Las Vegas or even the planet Mars. After these ideas fell through, the studio returned to Dante, who agreed to make the sequel after receiving the rare promise of having complete creative control over the movie; he also received a budget triple that of the original films. Dante later acknowledged that by this point too much time had passed between the films, thus possibly reducing Gremlins 2’s appeal.

Principle photography for Gremlins 2 took place in New York. Filming took place in 1989 at a time when cable television, genetics, and frozen yoghurt were becoming more common and influential. This left a mark on Gremlins 2. Gremlins 2 exaggerated what could be seen on cable television at the time, although as the filmmakers noted in 2002, that humour might be lost on present-day audiences. Cable television later grew to provide the same variety. Genetics in 1990 is reflected in the laboratory scene in Gremlins 2, and frozen yoghurt is what the Mogwai eat after midnight.

When Gremlins 2 was released in received mix critical reviews. Roger Ebert, who had approved of the first film, observed that Gremlins 2 was meant to satirise sequels. Nevertheless, he felt it did not manage to differentiate itself from the original enough and was not as good. He went on to claim that the film lacks a well-constructed plot, and once the Gremlins arrived the film simply becomes a “series of gags.” He thus gave the film two and a half stars, out of a possible four. Some critics who thought the first film was too dark gave Gremlins 2 better reviews.

Commercially, Gremlins 2 struggled having been produced on an estimated $50m budget. On its opening weekend it achieved $9,700,000 in the US but only grossed $41,482,207 in US box office receipts. 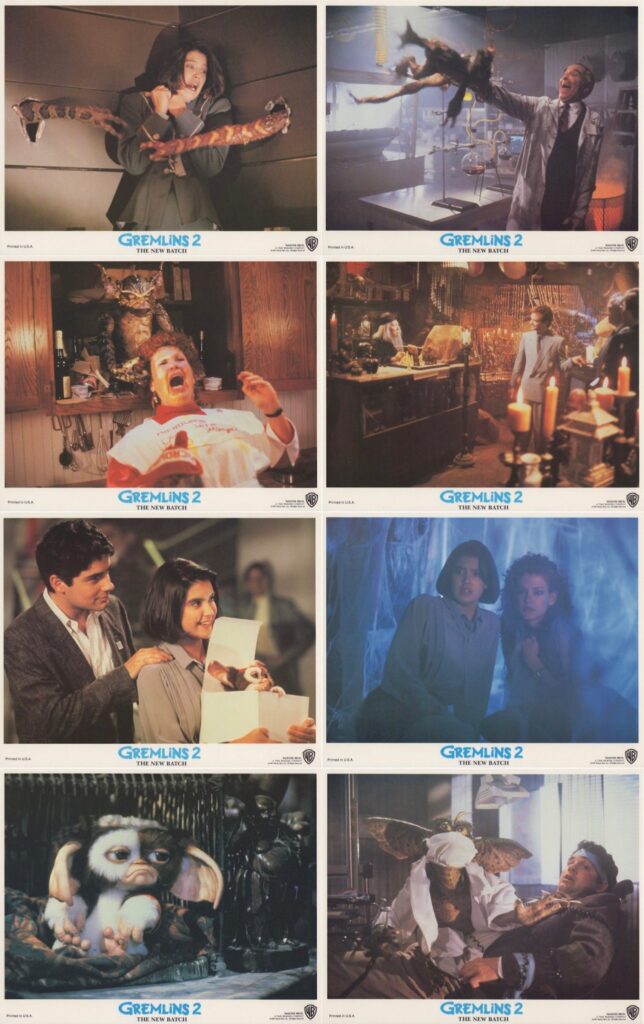