The storyline follows Neil McCauley, a professional thief who has Lt. Vincent Hanna, an LAPD robbery-homicide detective trying to track him and his gang down following the robbery of an armoured car. The film is based on the true story of a real Neil McCauley, a calculating criminal and ex-Alcatraz inmate who was tracked down by Detective Chuck Adamson in 1964. On March 25, 1964, McCauley and members of his regular crew followed an armoured car that delivered money to a Chicago grocery store. Once the drop was made, three of the robbers entered the store. They threatened the clerks and stole money bags worth $10,000 before they sped off amid a hail of police gunfire.

Heat is a remake of a cancelled TV series by Michael Mann. He wrote a draft 180-page script for Heat in 1979. He offered the film to his friend, film director Walter Hill, who turned him down. Following the success of Miami Vice and Crime Story, NBC asked Michael Mann to produce a new crime television show and he turned the script that he originally wrote for Heat. He turned it into a 90-minute pilot for a television series featuring the LAPD Robbery Homicide Division with Scott Plank in the role of Hanna and Alex McArthur playing the character of Neil McCauley, renamed to Patrick McLaren. The network was unhappy with Scott Plank as the lead actor and asked Mann to recast Hanna’s role. When he declined, the show was cancelled and the pilot aired in August 1989 called L.A. Takedown.

Principle photography was completely entirely on location in California, USA. To make the shootout scene more realistic, the production team hired ex-SAS Sergeant Andy McNab as a technical weapons trainer and adviser. He designed a weapons training schedule for the actors over a three month period using live ammunition before filming with blanks.

When Heat was released its positive reviews from the critics. On Rotten Tomatoes it currently holds a rating of 86% with the consensus saying “ Though Al Pacino and Robert De Niro share but a handful of screen minutes together, Heat is an engrossing crime drama that draws compelling performances from its stars – and confirms Michael Mann’s mastery of the genre”. Roger Ebert gave the film three and a half stars out of four, writing: “It’s not just an action picture. Above all, the dialogue is complex enough to allow the characters to say what they’re thinking: They are eloquent, insightful, fanciful, poetic when necessary. They’re not trapped with cliches. Of the many imprisonments possible in our world, one of the worst must be to be inarticulate — to be unable to tell another person what you really feel”.

Commercially, Heat was a box office success. Having been made on an estimated production budgets of $60m, it went on to take $8,445,656 in US box office takings from its opening weekend. Heat went on to achieved total worldwide box office receipts of $187,436,818 which ranked it as the 25th highest-grossing film of 1995. 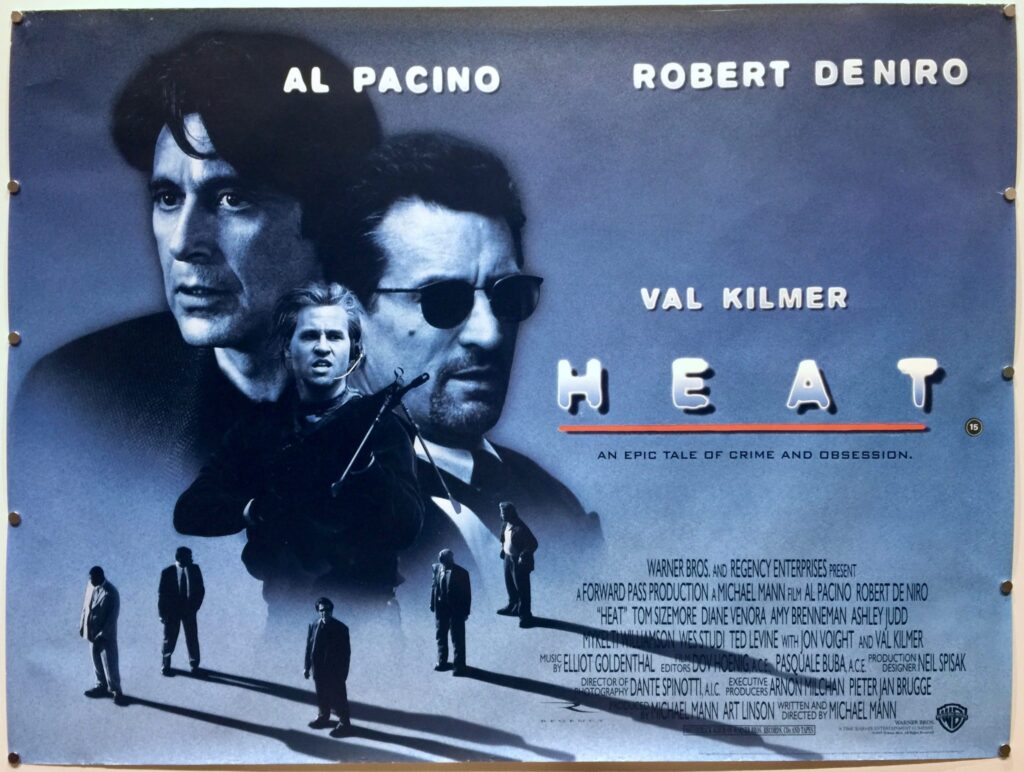