Indiana Jones and the Last Crusade is a 1989 film directed by Steven Spielberg, from a story co-written by executive producer George Lucas. It is the third instalment in the Indiana Jones franchise. Harrison Ford reprises the title role and Sean Connery plays Indiana’s father, Henry Jones, Sr. Other cast members featured include Alison Doody, Denholm Elliott, Julian Glover, River Phoenix, and John Rhys-Davies. In the film, set largely in 1938, Indiana searches for his father, a Holy Grail scholar, who has been kidnapped by Nazis.

After the mixed reaction to Indiana Jones and the Temple of Doom, Spielberg chose to compensate with a film that toned down the violence and gore. During the five years between Temple of Doom and Indiana Jones and the Last Crusade, he and executive producer George Lucas reviewed several scripts before accepting Jeffrey Boam’s. Filming locations included Spain, Italy, United Kingdom, Turkey and Jordan.

The film was released in North America on 24th May 1989, to mostly positive reviews. It was a financial success and earned $474,171,806 in worldwide box office takings. Indiana Jones and the Last Crusade won an Academy Award for Best Sound Editing and was nominated for a further 3 Academy Awards, 1 Golden Globe and 3 BAFTA Film Awards.

Indiana Jones, famed adventurer and archaeologist acquires a diary that holds clues and a map with no names to find the mysterious Holy Grail – which was sent from his father, Dr Henry Jones, in Italy. Upon hearing from a private collector, Walter Donavan, that the mission for the Holy Grail went astray with the disappearance of his father, Indiana Jones and museum curator Marcus Brody venture to Italy in search of Indy’s father. However, upon retrieving Dr Henry Jones in Nazi territory, the rescue mission turns into a race to find the Holy Grail before the Nazis do- who plan to use it for complete world domination for their super-race. With the diary as a vital key and the map with no names as a guide, Indiana Jones once again finds himself in another death-defying adventure of pure excitement. 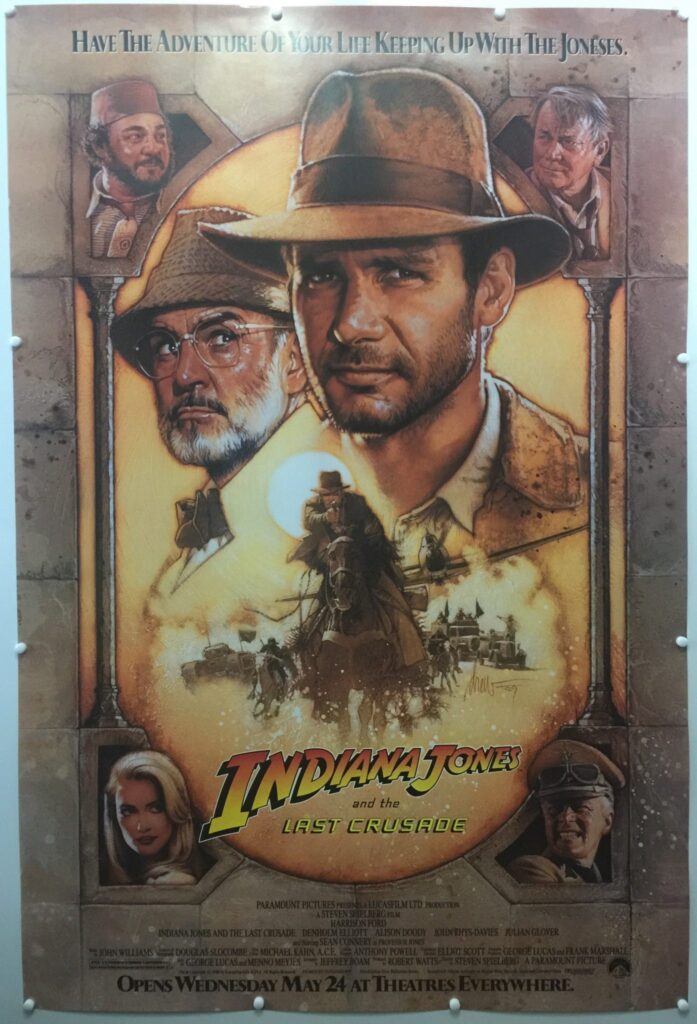