IRON GIANT US ONE SHEET

The Iron Giant is a 1999 film directed by Brad Bird. It co-produced by Allison Abbate and Des McAnuff with Tim McCanlies writing the screenplay. It is based on the 1968 novel The Iron Man, by poet Ted Hughes, who wrote the novel for his children. The book was published as The Iron Giant in the US. The Iron Giant stars the voices of Jennifer Aniston, Harry Connick, Jr., Vin Diesel, James Gammon, Cloris Leachman, Christopher McDonald, John Mahoney, Eli Marienthal and M. Emmet Walsh.

The storyline is set during the Cold War in 1957. The film follows a young boy called Hogarth Hughes, who discovers a giant metallic robot who fell from space. With the help of beatnik artist Dean McCoppin, they attempt to prevent the U.S. military and Kent Mansley, a paranoid federal agent, from finding and destroying the Giant.

In the 1989, The Who’s Pete Townshend, had adapted the book for a concept album which was released as The Iron Man: A Musical. After hitting the stage as a musical in London, Des McAnuff, who had adapted Tommy with Townshend for the stage, believed that The Iron Man could translate to the big screen.

When Brad Bird came on board with the project he was given an usual amount of creative freedom by the production company, Warner Bros. After reading the book he was impressed with the mythology of the story. The creative control allowed him to introduce two new characters, Dean and Kent and set the film in America. In an interview he expanded upon his desire to set the film in 1950s America and said “The Maine setting looks Norman Rockwell idyllic on the outside, but inside everything is just about to boil over; everyone was scared of the bomb, the Russians, Sputnik — even rock and roll. This clenched Ward Cleaver smile masking fear (which is really what the Kent character was all about). It was the perfect environment to drop a 50-foot-tall robot into.”

When The Iron Giant was released it received widespread critical acclaim. On Rotten Tomatoes it holds a 96% rating with the general consensus “The endearing Iron Giant tackles ambitious topics and complex human relationships with a steady hand and beautifully animated direction from Brad Bird”. Roger Ebert of the Chicago Sun-Times compared it, both in story and animation, to the works of Japanese director Hayao Miyazaki, summarising the film as “not just a cute romp but an involving story that has something to say”.

Despite the acclaim of the film critics, The Iron Giant was a commercial failure. Having been produced on an estimated production budget of $70m, it took $5,732,614 in its opening weekend. Its gross box office receipts worldwide only amounted to $80m, which was blamed on an poor marketing campaign by Warner Bros. Despite this, The Iron Giant has gathered a cult following and is widely regarded as a modern animated classic. 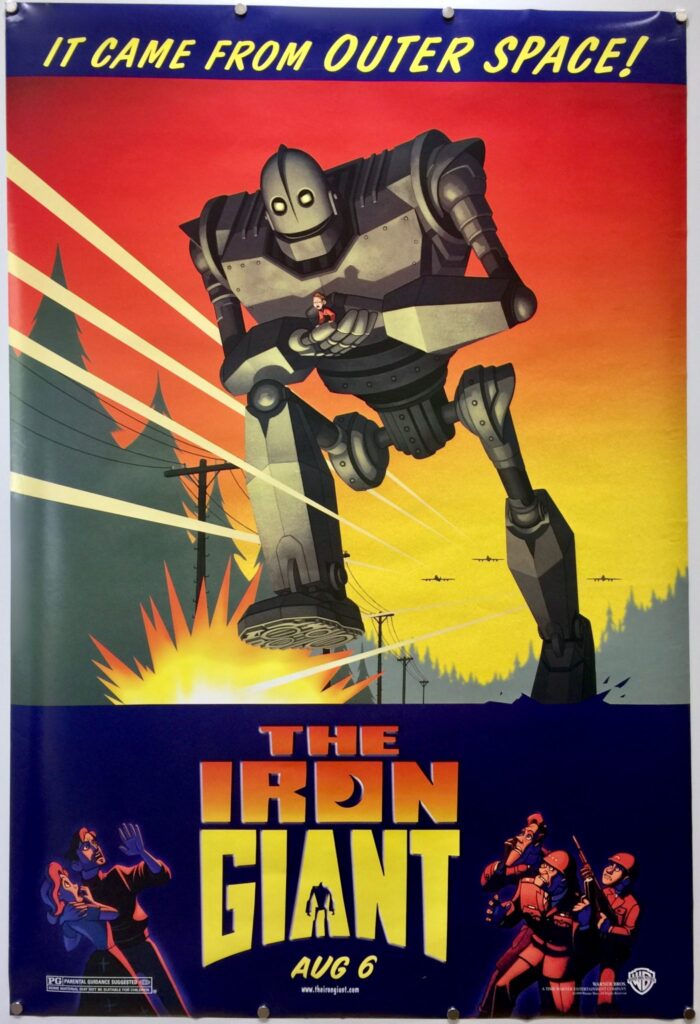