GoldenEye was released in 1995 and is the 17th film in the James Bond series. It was directed by Martin Campbell and co-produced by Michael G. Wilson and Barbara Broccoli. The screenplay was co-written by Jeffrey Caine and Bruce Feirstein. Goldeneye is the first film in the series to not take story elements from the works of Ian Fleming and is based on a story conceived and written by Michael France. The film stars Pierce Brosnan – in his first appearance as James Bond, Sean Bean, Izabella Scorupco, Judi Dench, Famke Janssen and Joe Don Baker.

The film’s title, GoldenEye is a homage to James Bond’s creator, Ian Fleming. While he was working for British Naval Intelligence as a Lieutenant Commander, Fleming liaised with the American OSS to monitor developments in Spain after the Spanish Civil War in an operation codenamed Operation Goldeneye. Ian Fleming also used the name for his estate in Oracabessa, Jamaica.

The storyline follows James Bond on the hunt for a deadly satellite weapon system after it falls into the wrong hands. Bond must investigate the identity of the Janus Syndicate, who have stolen the weapon from a Russian research facility after an accident. Along the way, James Bond must go up against a sexy yet deadly assassin and a renegade Russian general who happen to work directly for Janus.

Goldeneye was released 6 years after Licence to Kill after a legal dispute when the James Bond back catalogue was leased to Pathé at a lower-than-market-value, without consulting Danjaq. During the dispute, Timothy Dalton resigned from the role of James Bond. The character of M, was recast with Judi Dench becoming the first woman to play the role. Miss Moneypenny was also recast, with Samantha Bond; Desmond Llewelyn was the only actor to reprise his role, as Q.

Principle photography for Goldeneye didn’t take place at Pinewood Studios, the usual location for Bond films as it had been reserved for First Knight. Instead, an old Rolls-Royce factory at Leavesden Aerodrome in Hertfordshire was converted into a new studio, dubbed Leavesden Studios. The bungee jump was filmed at the Contra Dam in Ticino, Switzerland. For the tank chase reference footage was shot on location in St. Petersburg and matched to the studio at Leavesden. The armoured train scenes were filmed on the Nene Valley Railway, near Peterborough, UK. The train was composed of a British Rail Class 20 diesel-electric locomotive and a pair of BR Mk 1 coaches, all three heavily disguised to resemble a Soviet armoured train.

When Goldeneye was released it received mainly positive reviews from critics. Roger Ebert of the Chicago Sun-Times, gave the film 3 out of 4 stars. He said Pierce Brosnan’s portrayal of Bond was “somehow more sensitive, more vulnerable, more psychologically complete” than the previous ones, also commenting on Bond’s “loss of innocence” since previous films. Several of the reviews lauded M’s appraisal of Bond as a “sexist, misogynist dinosaur”. Tom Sonne of the Sunday Times considered GoldenEye the best Bond film since The Spy Who Loved Me.

Goldeneye was commercially a success having been produced on an estimated production budget of $60m, it took $26,205,007 in US box office takings in its opening weekend. It went on to take $352,194,034 in gross worldwide box office receipts. Goldeneye was nominated for two BAFTA Awards for Best Achievement in Special Effects and Best Sound but lost to Apollo 13 and Braveheart, respectively. 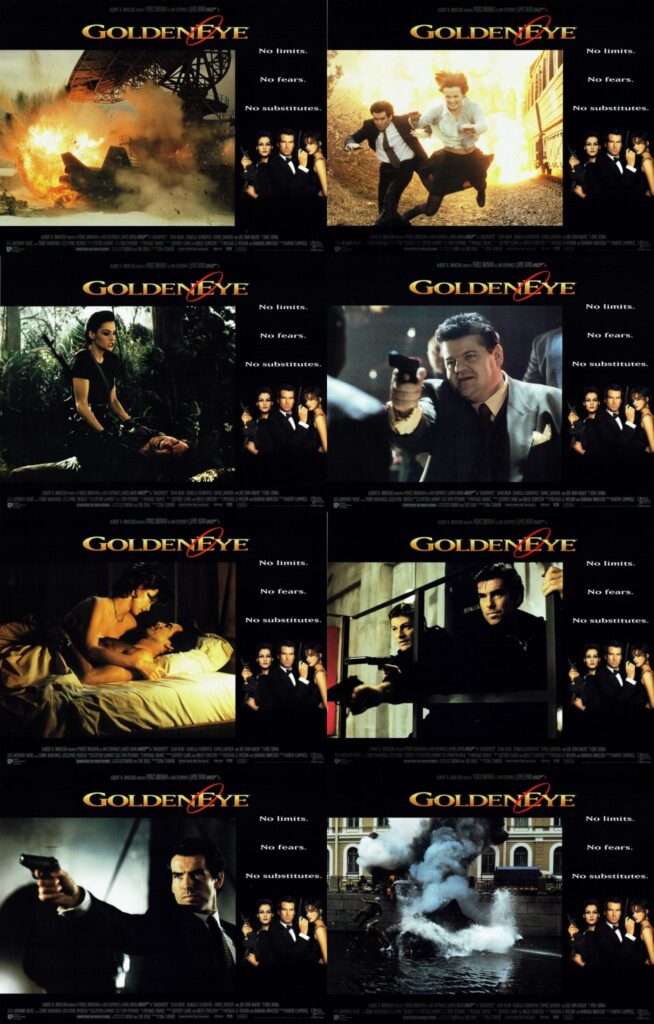