Octopussy was released in 1983 and is the 13th film in the James Bond series. It was directed by John Glen and produced by Albert R. Broccoli. The screenplay was co-written by George MacDonald Fraser, Michael G. Wilson and Richard Maibaum based on the character created by Ian Fleming. Octopussy stars Roger Moore, Maud Adams, Louis Jourdan, Kristina Wayborn and Kabir Bedi. Octopussy was released in the same year as the non-Eon Productions film Never Say Never Again starring Sean Connery as 007, James Bond.

The film’s title, Octopussy comes from the Ian Fleming’s 1966 collection of short stories called Octopussy and The Living Daylights, although the film’s plot is original. However, the scene at Sotheby’s is drawn from the short story The Property of a Lady which was included in 1967 and later editions of Octopussy and The Living Daylights, while Kamal Khan’s reaction following the backgammon game is taken from Fleming’s novel Moonraker. The events of the short story Octopussy form a part of the title character’s background and are recounted by her.

The storyline sees James Bond assigned to the task of following a general who is stealing jewels and relics from the Soviet government. This leads him to a wealthy Afghan prince, Kamal Khan, and his business associate, Octopussy. James Bond uncovers a plot to force disarmament in Europe with a nuclear attack on N.A.T.O. forces.

Most of the filming for Octopussy was shot in Udaipur, India. The Monsoon Palace served as the exterior of Kamal Khan’s palace, while scenes set at Octopussy’s palace were filmed at the Lake Palace and Jag Mandir, and James Bond’s hotel was the Shiv Niwas Palace. RAF Northolt, RAF Upper Heyford and RAF Oakley were the main locations used in the UK. The Karl-Marx-Stadt railways scenes were shot at the Nene Valley Railway, near Peterborough, while studio work was performed completed at the 007 Stage located at Pinewood Studios. The cyclist seen passing in the middle of a sword fight during the tuk-tuk chase sequence was, in fact, a bystander who passed through the shot, oblivious to the filming; his intrusion was captured by two cameras and left in the final film.

When Octopussy was released it received mixed reviews from the critics. On Rotten Tomatoes it has a 42% rating with the critics’ consensus says, “Despite a couple of electrifying action sequences, Octopussy is a formulaic, anachronistic Bond outing”. Some reviewers disliked James Bond’s clown costume, gorilla outfit and Tarzan yell during a jungle chase.

Octopussy was commercially a success having been produced on an estimated production budget of $27.5m, it took $8,902,564 in US box office takings in its opening weekend. It went on to take $187,500,000 in gross worldwide box office receipts. It earned slightly less than For Your Eyes Only which was the previous James Bond film in the series. Octopussy did perform slightly better than Never Say Never Again, the non-Eon James Bond remake of Thunderball which came out a few months later. 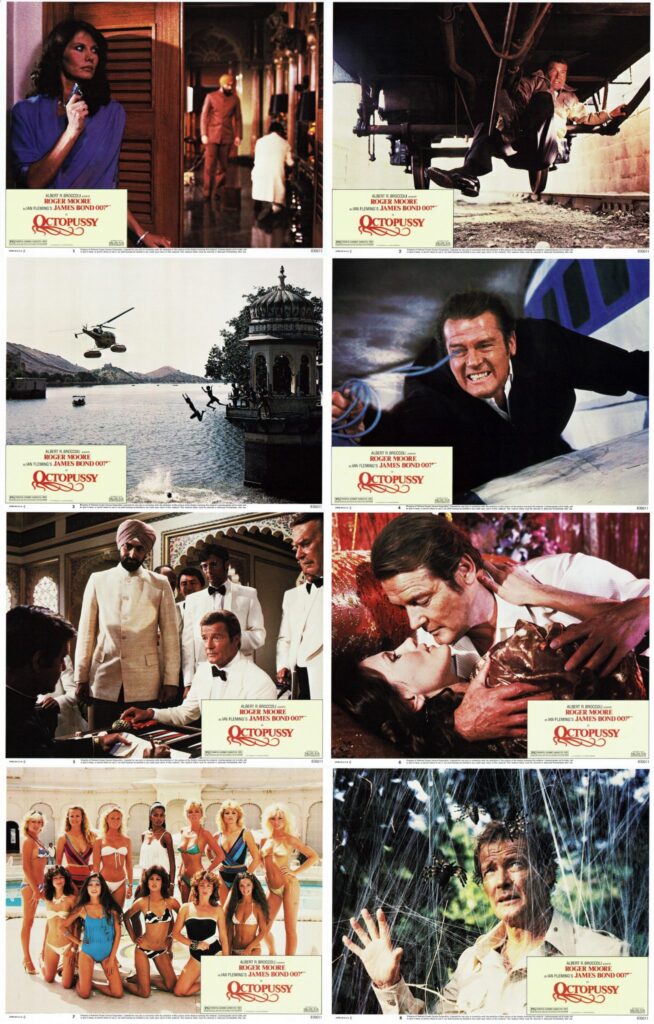