Masters of the Universe is a 1987 film directed by Gary Goddard. It was co-produced by Yoram Globus and Menahem Golan with David Odell writing the screenplay based on a collection of Mattel action figures from Masters of the Universe. The film stars Dolph Lundgren, Frank Langella, Jon Cypher, Chelsea Field, Billy Barty and Courteney Cox.

The storyline follows two teenagers, Julie Winston and her boyfriend Kevin Corrigan who meet the mighty warrior He-Man. He has arrived on Earth from planet Eternia looking for the Cosmic Key, a device that can open portals that lead to anywhere in the galaxy. They embark on a mission to save the universe and become embroiled in the intergalactic battle between He-Man and Skeletor, his arch-nemesis.

During production the original draft script for Masters of the Universe included more time spent on the planet Eternia and Snake Mountain with Beast man in a speaking role. It even revealed that He-Man’s mother was originally from Earth, as per the character Queen Marlena from the animated series He-Man and the Masters of the Universe, thus linking the two planets. When Frank Langella was offered the role, Skeletor, he said “didn’t even blink … I couldn’t wait to play him”. Langella referred to his then-four-year-old son’s love of Skeletor while running around his house yelling He-Man’s battle cry “I have the power!”, as the reason he chose to play He-Man’s arch-nemesis.

Prior to releasing it, the Cannon Group touted Masters of the Universe as the Star Wars of the 1980s. When Masters of the Universe was released it received negative reviews from critics and currently holds a 17% rating on Rotten Tomatoes. Variety called it a “Conan-Star Wars hybrid ripoff” that is “a colossal bore” and Walter Goodman of The New York Times wrote, “If you liked the toy, you’ll love the movie”. Michael Wilmington of the Los Angeles Times called it “a misfiring, underdone epic”.

Commercially, Masters of the Universe was a failure having been produced on an estimated production budget of $22m, it took $4,883,168 in US box office takings in its opening weekend. It only went on to take $17,336,370 in gross US box office receipts. Despite the critical and commercial failure of the film it has since become a popular cult film.

Due to the commercial failure of Masters of the Universe with Superman IV: The Quest for Peace and Lifeforce this directly lead to the eventual closure of Cannon Films. They had originally intended for a Masters of the Universe sequel as indicated during the end credits with the revealing of Skeletor’s survival. The sequel titled “Masters of the Universe 2: Cyborg” was written and followed He-Man, who returned to Earth to battle Skeletor, who has left Earth as a post-apocalyptic wasteland and the film was to feature Trap Jaw and She-Ra. The film was abandoned when Cannon would not pay Mattel’s fees and the production instead utilised the already-made costumes and sets for the low-budget sci-fi film Cyborg, released in 1989 and starring Jean-Claude Van Damme.

Masters of the Universe was Dolph Lundgren’s first leading role in a feature film following his success in Rocky IV, and he later labeled it as his least favourite film role. Conversely, Frank Langella considers playing Skeletor to be one of his favourite roles.

A reboot of the film was announced in April 2017 and has a planned release date 18th December 2019 with David Samuel Goyer being brought on board. David Samuel Goyer wrote the screenplays for the Blade trilogy and The Dark Knight trilogy. 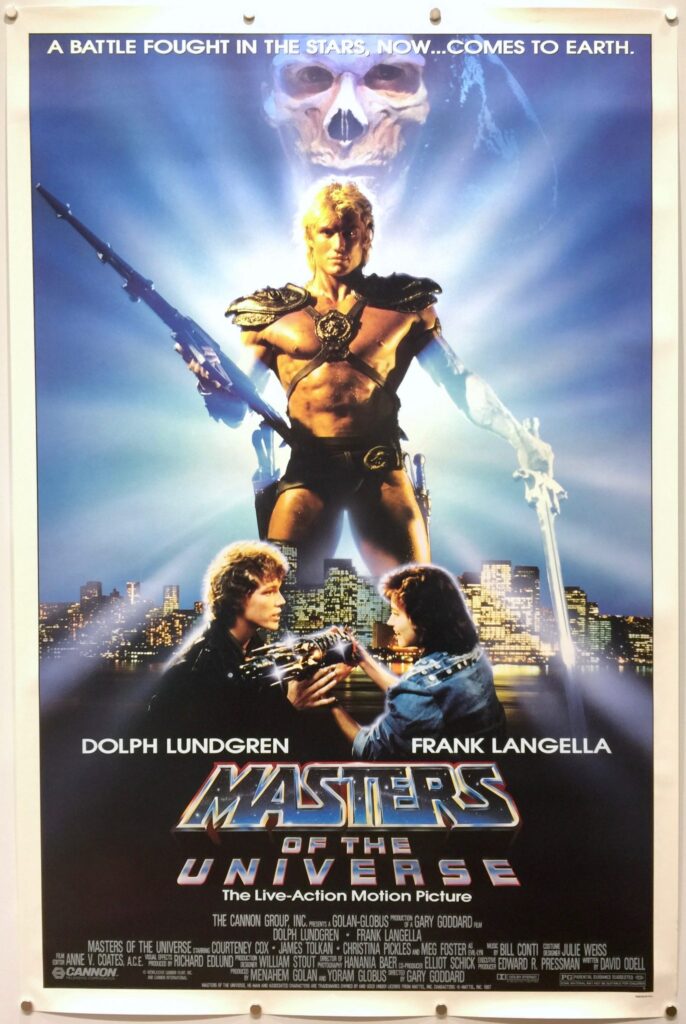