Nighthawks is a 1981 film directed by Bruce Malmuth and was produced by Martin Poll. The screenplay was written by David Shaber based on his and Paul Sylbert story. It stars Sylvester Stallone, Billy Dee Williams, Lindsay Wagner, Persis Khambatta, Nigel Davenport, Rutger Hauer, Hilary Thompson, Joe Spinell and Walter Mathews.

The storyline follows NYPD police detective Deke DaSilva who gets transferred into the new new anti-terrorist unit from the undercover division and is pretty hostile to the idea. The unit is run by a British expert who suspects a major terrorist is in town and his message is shoot to kill.

Initially the story for Nighthawks was planned to be The French Connection III with Gene Hackman’s reprising his role Popeye Doyle and teaming up with a wisecracking cop. However, Hackman was reluctant to make a third film and the idea was scrapped; Universal acquired the rights to the storyline, which David Shaber reworked into Nighthawks.

Due to interference from Sylvester Stallone and the studio in post-production, the film was heavily re-edited and was released a year after it was finished. Nighthawks marked the American debut of Dutch actor Rutger Hauer.

The first scene Rutger Hauer filmed on set was his death scene, in which he was injured twice. A squib exploded and on the wrong side severely burning him; a cable which yanked him (simulating the force of being shot) was pulled too hard, straining his back. He later learned that the cable was pulled forcefully according to Stallone’s orders, and their relationship was then marked by disagreements.

When Nighthawks was released it positive reviews from the critics. On Rotten Tomatoes it holds a 72% rating and an audience score of 55%. Janet Maslin of The New York Times praised Rutger Hauer’s performance saying, “Mr. Hauer’s terrorist, in particular, is a sharply drawn character who acts as a driving force within the movie’s scheme. Sadism and bloodlessness are his only identifiable characteristics, and yet he behaves memorably wherever he goes”.

Commercially, Nighthawks was a box office success. Produced on an estimated production budget of $5m, it took $2,525,360 in the US on its opening weekend. It went on to take $19,900,000 in total worldwide box office receipts. 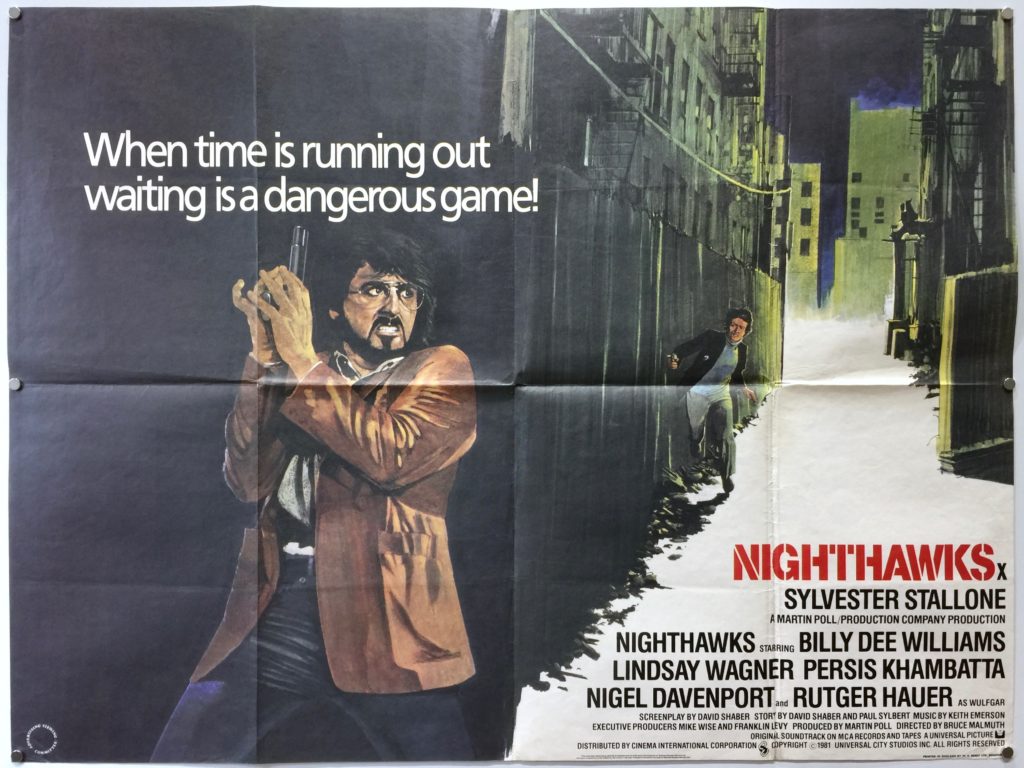