The storyline follows an elite special forces team who are on a mission to rescue hostages from guerrilla territory in Val Verde in Central America’s Northern Triangle. Instead of rescuing the hostages they find themselves being hunted by the ultimate enemy, the Predator. Nothing like it has ever been on earth before. It kills for pleasure, it hunts for sport.

Following the release of Rocky IV there was a running joke in Hollywood saying that since Rocky Balboa had run out of earthly opponents, he should fight an alien in the fifth instalment. Jim Thomas and John Thomas took inspiration from the joke and wrote a screenplay based upon it. The script for the Predator was originally called Hunter, as was the working title.

When the special edition of Predator was released it included a documentary about the original monster suit designed by Stan Winston. The original suit was vastly different from the final version and was a disproportionate, ungainly creature with large yellow eyes and a dog-like head and it was nowhere near as agile. While on a flight to Fox Studios with Aliens director James Cameron, Stan Winston was sketching monster ideas, when James Cameron suggested he had always wanted to see a creature with mandibles, which became part of the Predator’s iconic look.

Jean-Claude Van Damme was originally cast to play the Predator. The idea was his martial arts skills would make the Predator more agile, ninja-esque hunter. However, when compared to Arnold Schwarzenegger, Carl Weathers and Jesse Ventura it became apparent a more physically imposing man was needed to make the creature appear threatening. Van Damme was removed from the film and replaced by Kevin Peter Hall.

Principal photography for Predator began in the jungles of Palenque, Mexico and the beach resort of Puerto Vallarta, Mexico. During filming Carl Weathers said in an interview “the actors would secretly wake up as early as 3:00 a.m. to work out before the day’s shooting”. He also stated that he would act as if his physique was naturally given to him, and would work out only after the other actors were nowhere to be seen. The cast and crew filmed on rough terrain and Arnold Schwarzenegger said “always on a hill. We stood all day long on a hill, one leg down, one leg up. It was terrible”. He also said of working with Kevin Peter Hall, who could not see in the Predator suit, “so when he’s supposed to slap me around and stay far from my face, all of a sudden, whap! There is this hand with claws on it!”.

When it was released, Predator received mixed reviews from the critics. On Rotten Tomatoes it holds a 78% rating with the consensus saying “Predator: Part sci-fi, part horror, part action — all muscle”. Elvis Mitchell of The New York Times described it as “grisly and dull, with few surprises”. Michael Wilmington of the Los Angeles Times proclaimed it “arguably one of the emptiest, feeblest, most derivative scripts ever made as a major studio movie”. However, Roger Ebert was more complimentary of the film giving it three out of four stars, and said “it supplies what it claims to supply: an effective action movie”. In years following release the critics’ attitudes toward the film have became more positive and it has appeared on various “best of” lists.

Commercially, Predator was a success despite the mixed reviews. It was produced an estimated but of $15m and took $12,031,638 in its opening weekend in the US with worldwide gross box office receipts standing at $98,235,548. It was nominated for an Academy Award in 1988 for Best Effects & Visual Effects.

Predator has spawned two direct sequels, Predator 2 released in 1990 and Predators released in 2010. There was also two crossover films with the Alien franchise, Alien vs. Predator in 2004 and Aliens vs. Predator: Requiem in 2007. Another film is scheduled for released in 2018 called The Predator. 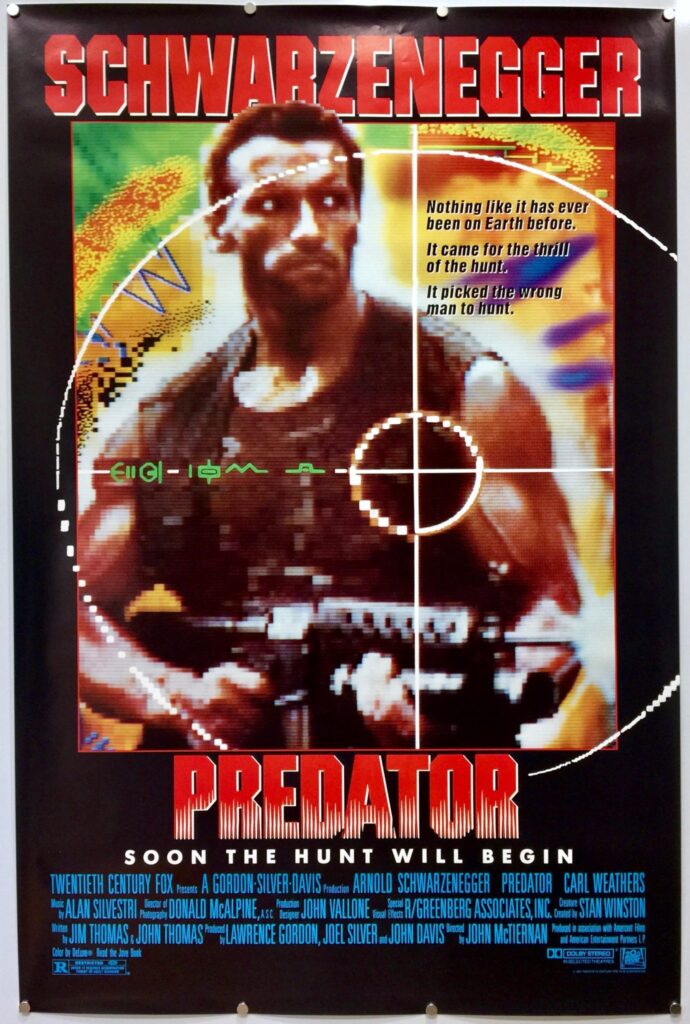 Type of Poster
One Sheet
Style of Poster
Final
Origin of Poster
USA
Year of Poster
1987
Designer
Unknown
Artist
Unknown
Size (Inches)
41″ x 27″
NSS # / Printer Markings
None
Tagline
It came for the thrill of the hunt. It picked the wrong man to hunt. | Soon the hunt will begin.