Pulp Fiction is a 1994 American neo-noir crime black comedy film written and directed by Quentin Tarantino, from a story by Tarantino and Roger Avary. Tarantino’s second feature film, it is iconic for its eclectic dialogue, ironic mix of humour and violence, nonlinear storyline, and a host of cinematic allusions and pop culture references. The film was nominated for seven Oscars, including Best Picture; Tarantino and Avary won for Best Original Screenplay. It was also awarded the Palme d’Or at the 1994 Cannes Film Festival. A major critical and commercial success, it revitalized the career of its leading man, John Travolta, who received an Academy Award nomination, as did co-stars Samuel L. Jackson and Uma Thurman.

Directed in a highly stylised manner, Pulp Fiction connects the intersecting storylines of Los Angeles mobsters, fringe players, small-time criminals, and a mysterious briefcase. Considerable screen time is devoted to monologues and casual conversations that reveal the characters’ senses of humour and perspectives on life. The film’s title refers to the pulp magazines and hardboiled crime novels popular during the mid-20th century, known for their graphic violence and punchy dialogue. Pulp Fiction is self-referential from its opening moments, beginning with a title card that gives two dictionary definitions of “pulp”. The plot, as in many of Tarantino’s other works, is presented out of chronological order.

The picture’s self-reflexivity, unconventional structure, and extensive use of homage and pastiche have led critics to describe it as a prime example of postmodern film. The film has also been described as a black comedy and a “net-noir”. Pulp Fiction is viewed as the inspiration for many later movies that adopted various elements of its style. The nature of its development, marketing, and distribution – and its consequent profitability – had a sweeping effect on the field of independent cinema. It is often considered a cultural watershed, with a strong influence felt in several other media.

A 2008 Entertainment Weekly poll named Pulp Fiction the finest film to have been released since 1983, and it is considered by many critics to be one of the best-written films of all time. The film ranks #9 on Empire magazine’s 2008 list of the 500 greatest movies of all time. In 2013, the film was selected for preservation in the United States National Film Registry by the Library of Congress as being “culturally, historically, or aesthetically significant”. 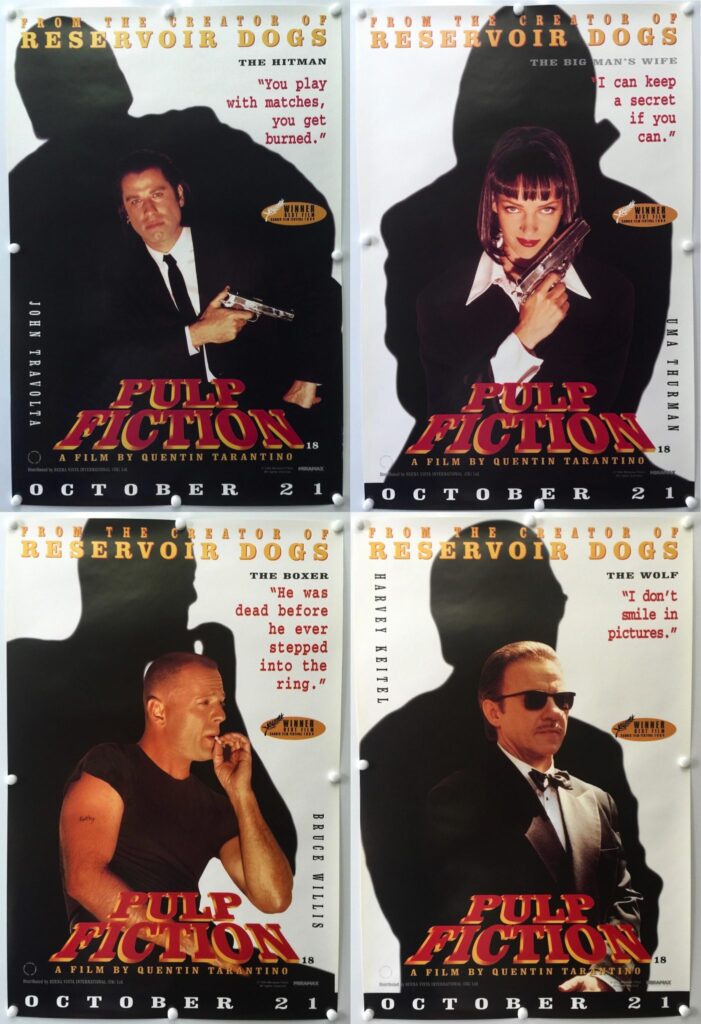 Type of Poster
UK Misc
Style of Poster
Advance
Origin of Poster
UK
Year of Poster
1994
Designer
Unknown
Artist
Unknown
Size (Inches)
13 1/4″ x 20″
Single Sided or Double Sided
Single Sided
NSS # / Printer Markings
N/A
Tagline
You Play with Matches, You Get Burnt | I Can Keep a Secret If You Can | He Was Dead Before He Even Stepped Into The Ring | I Don’t Smile In Pictures