Raging Bull is a 1980 film directed by Martin Scorsese, produced by Robert Chartoff and Irwin Winkler and adapted by Paul Schrader and Mardik Martin from Jake LaMotta’s memoir Raging Bull: My Story. It stars Robert De Niro as Jake LaMotta, an Italian American middleweight boxer whose self-destructive and obsessive rage, sexual jealousy, and animalistic appetite destroyed his relationship with his wife and family. Also featured in the film are Joe Pesci as Joey, La Motta’s well-intentioned brother and manager who tries to help Jake battle his inner demons, and Cathy Moriarty as his wife. The film features supporting roles from Nicholas Colasanto, Theresa Saldana and Frank Vincent.

Scorsese was initially reluctant to develop the project, though he eventually came to relate to La Motta’s story. Schrader re-wrote Martin’s first screenplay, and Scorsese and De Niro together made uncredited contributions thereafter. Pesci was an unknown actor prior to the film, as was Moriarty, who was suggested for her role by Pesci. During principal photography, each of the boxing scenes was choreographed for a specific visual style and De Niro gained approximately 60 pounds (27 kg) to portray La Motta in his later post-boxing years. Scorsese was exacting in the process of editing and mixing the film, expecting it to be his last major feature.

After receiving mixed initial reviews (and criticism due to its violent content), it went on to garner a high critical reputation and is now regarded among the greatest films ever made, including by Roger Ebert of the Chicago Sun-Times, Gene Siskel of the Chicago Tribune, British film historian Leslie Halliwell, the American Film Institute, Time, The New York Times, Variety, Entertainment Weekly, Empire, Total Film, Film 4, and BFI’s Sight and Sound. In 1990, it became the first film to be selected for preservation in the National Film Registry in its first year of eligibility. The film is now regarded by many as Scorsese’s magnum opus.

When Jake LaMotta played by Robert De Niro, steps into a boxing ring and obliterates his opponent, he’s a prizefighter. When he treats his friends and family the same way, he’s a ticking time bomb, ready to go off at any moment. Though LaMotta wants his family’s love, something always seems to come between them. Perhaps it’s his violent bouts of paranoia and jealousy. This kind of rage helped make him a champ, but in real life, he winds up in the ring alone. 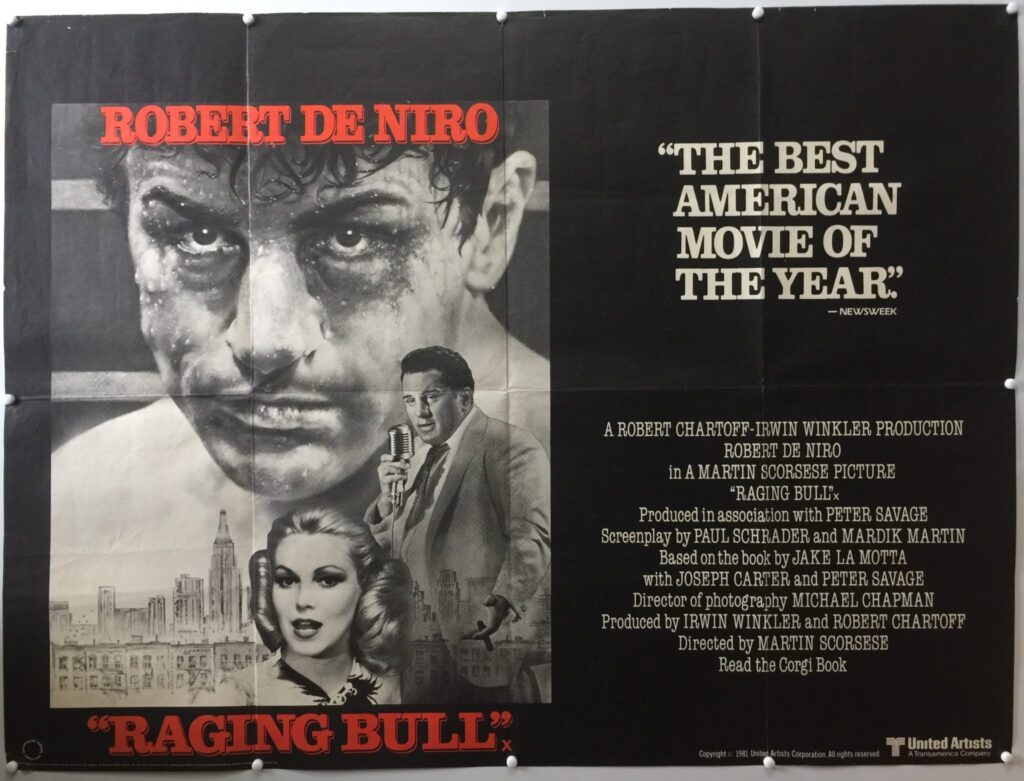