RETURN OF THE JEDI UK QUAD

Return of the Jedi (also known as Star Wars: Episode VI – Return of the Jedi) is a 1983 film directed by Richard Marquand. It was produced by Howard Kazanjian with Lawrence Kasdan co-writing the screenplay with George Lucas based on his own story. Return of the Jedi sees the return of many of the same characters from the previous films; Mark Hamill, Harrison Ford, Carrie Fisher, Billy Dee Williams, Anthony Daniels, David Prowse, Kenny Baker, Peter Mayhew and Frank Oz.

The third instalment in the original Star Wars trilogy is set a year after the Empire Strikes Back as sees the Empire, lead by the ruthless evil Emperor building a second Death Star to crush the Rebel Alliance. After a daring mission to rescue Han Solo from Jabba the Hutt, the rebels go to Endor to plan the destruction of the new Death Star. With the Emperor overseeing the final stages of construction, the Rebel Alliance see it as an ideal way to destroy the Death Star and kill the Emperor launching a full-scale attack, effectively bringing to end the Empire’s hold over the galaxy. Meanwhile, Luke struggles to help Darth Vader back from the dark side without falling into the Emperor’s trap.

As with the previous films, George Lucas personally financed its production but chose not to direct the film himself. Lucas has commented that he would be on set quite frequently due to director Richard Marquand inexperience with special effects but did praise Marquand as a “very nice person who worked well with actors”. Of the situation, Marquand did say that Lucas kept a conspicuous presence on set and joked, “It is rather like trying to direct King Lear – with Shakespeare in the next room!”.

There had been some concern around whether Harrison Ford would return to the role of Hans Solo during pre-production. He unlike the other actors of the first film was not contracted to do two sequels. With the release of Raiders of the Lost Ark he had become an even bigger star but the producer, Howard Kazanjian who also worked on Raiders of the Lost Ark convinced Harrison Ford to return.

Yoda was not originally meant to appear in the film, but Marquand strongly felt that returning to Dagobah was essential to resolve the dilemma raised by the previous film. His inclusion led George Lucas to insert a scene in which Yoda confirms that Darth Vader is Luke Skywalker’s father because, after a discussion with a children’s psychologist, he did not want younger viewers to dismiss Darth Vader’s claim as a lie.

Principle photography was started at the Elstree Studios in Borehamwood, Hertfordshire, where they occupied all nine stages. After filming finished at Elstree, production moved to the Yuma Desert in Arizona to complete the exterior Tatooine shots before moving to the redwood forests of northern California near Crescent City where they shot the exterior Endor forest with filming concluding at Industrial Light & Magic (ILM) in San Rafael, California for the bluescreen shots.

When Return of the Jedi was released it met with huge excitement amongst its fans and received positive reviews from the critics. On Rotten Tomatoes it holds a rating of 80% with the consensus; “Though failing to reach the cinematic heights of its predecessors, Return of the Jedi remains an entertaining sci-fi adventure and a fitting end to the classic trilogy”. Film critic Roger Ebert gave the film four stars out of four. Return of the Jedi was nominated for four Academy Awards and won one for Special Achievement Award for Visual Effects, nominated for three BAFTA award winning one for Best Special Visual Effects.

Commercially, Return of the Jedi was a huge success with a loyal fanbase built up from the previous two films in the trilogy. Produced on an estimated production budget of $32.5m, it took $30,490,619 in US box office takings from its opening weekend. Total US box office receipts are $252,583,617. The film was rereleased in 1997 as part of a Special Edition marking the films 20th anniversary. The 1997 release included new scenes including the insertion of several alien band members in Jabba’s throne room, the modification of the Sarlacc to include a beak, the replacement of music at the closing scene and a montage of different alien worlds celebrating the fall of the Empire. Total worldwide box office receipts including the re-release are $572,705,079. 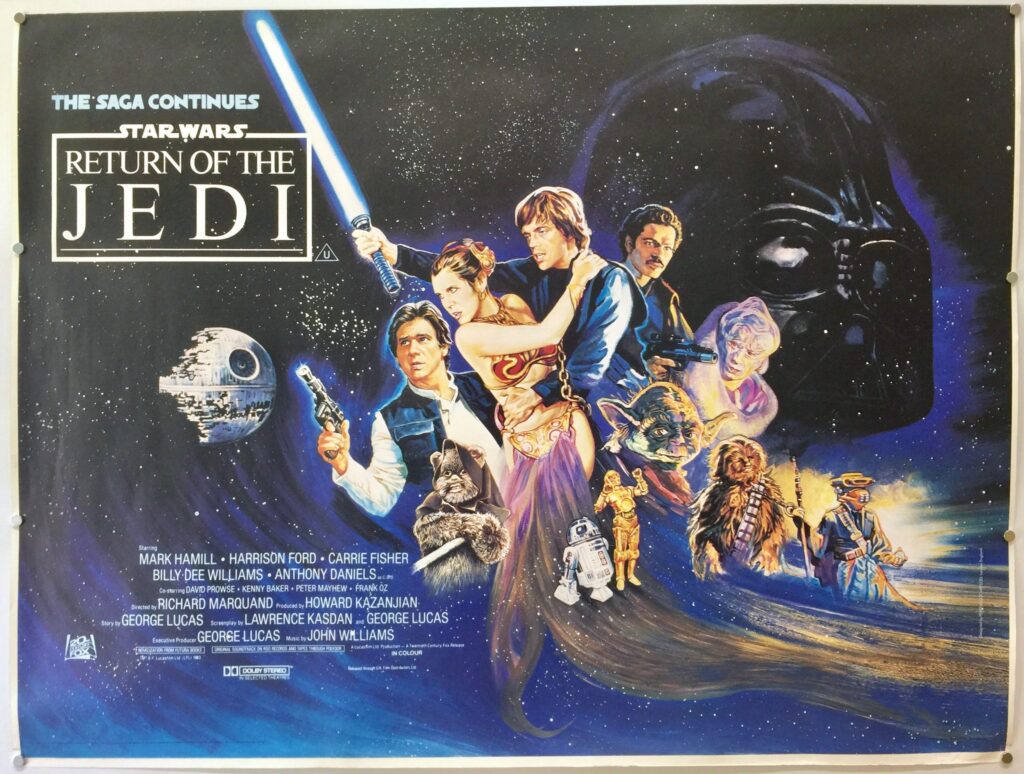