The storyline follows Sidney Prescott who is a high school student in a fictional town called Woodsboro, California. She becomes the target of a mysterious killer known as Ghostface. Scream combined black comedy and mystery with the violence of the slasher genre to mock and ridicule the traditional clichés of the horror film genre made popular in films such as Halloween and Friday the 13th. Part of the uniqueness of Scream was for featuring characters who are aware of real world horror films and openly discussed the clichés that Scream attempted to subvert.

Scream was originally titled Scary Movie by Kevin Williamson and was retitled as Scream just before filming was complete. It was influenced by a news story about a series of gruesome murders by the Gainesville Ripper. Casting for the film proved to be a turning point in the horror genre, which normally cast relatively unknown actors due to having lower budgets and receiving negative critical reviews. Part of the storyline sees the slaying of one of the film’s big stars early in the film. This was considered a calculated risk and was deemed to be so shocking and unexpected that the audience would then believe that any character could die.

Principal photography for Scream took place in Sonoma County, California. Other locations used included the cities of Santa Rosa, Healdsburg and nearby Tomales Bay. The house of Drew Barrymore’s character is situated South East of Santa Rosa on Sonoma Mountain Road and directly faces the house used in the horror film Cujo (1983). The home used for Rose McGowan home is situated on McDonald Avenue in Santa Rosa and next to the houses used in Pollyanna (1960) and Shadow of a Doubt (1943).

Santa Rosa High School was selected for filming scenes for Woodsboro High School. However, when the producers approached to use the location the school board wanted to see the script. They immediately objected to the violence used against teenage children and the cynical, dark dialogue including that of the fictional school principal. Locally comparisons were made between the violence of the film with the kidnap and murder of Polly Klaas 3 years before, which had left the area and population very sensitive towards violence. The production team were forced to find a new location for the school and ended up filming at the Sonoma Community Centre.

Upon its release, Scream, received positive critical acclaim with Roger Ebert of the Chicago Sun-Times giving the film a positive 3 out of 4 stars. He was appreciative of “the in-jokes and the self-aware characters”, however, was slightly confused over whether the level of violence was “defused by the ironic way the film uses it and comments on it”. The script was also praised by Adam Smith of Empire as containing “fiendishly clever, complicated plot” which “deftly mixes irony, self-reference and wry social commentary with chills and blood spills”.

Financially, Scream was also a success. Produced on an estimated budget of $14m, it took $6,354,586 in its opening weekend in the US and made $173,046,663 in worldwide box office receipts. It became the highest grossing slasher film in the US. It received several awards and nominations with the soundtrack by Marco Beltrami also being praised.

Scream is credited with revolutionising the horror genre in the 1990s which were considered to be a lesser market for filmmaking due to the number of direct-to-video titles released and the numerous sequels to established horror films of the 1970s and 80s. Typically they achieved less in terms of financial and critical success that their predecessors and seemed to exploit the clichés upon which the genre of the film had become reliant. Ironically, Scream followed suited with numerous sequels but only Scream 2 which was released in 1997 achieved any level of commercial or critical success. In the years following its release, Scream was accused of inspiring copycat crimes and inducing violent acts. 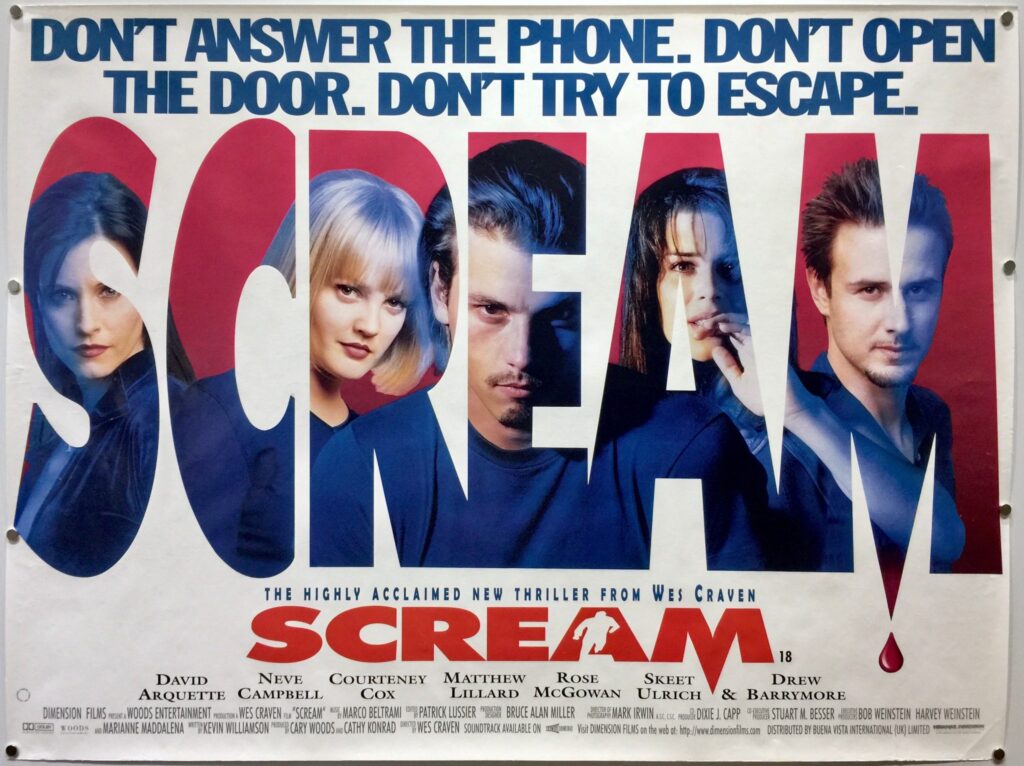