SMOKEY AND THE BANDIT US ONE SHEET

The storyline follows the Bandit and Cledus are two truck drivers who accept a dare from Big and Little Enos to pick up a truck loaded with bootlegged beer from Texas and have to deliver it to Atlanta. The problem the beer is not legally allowed to be sold east of the Mississippi River and local Texas Sheriff Buford T. Justice. The high-speed pursuit chase begins, will they make it in time?

Originally Hal Needham had planned to release the Smokey and the Bandit as a low-budget B movie with a production budget of $1m and Jerry Reed was going to play the Bandit. However, when Hal Needham friend, Burt Reynolds read the script, he said he would star and the film was given a mainstream release. At the time Burt Reynolds was the top box office star in the world. In his autobiography, Burt Reynolds said that when he first saw the script, he said it was the worst he had ever read but would still make the movie. During filming, most of the dialogue was improved.

Principle photography was main completed in the cities of McDonough, Jonesboro and Lithonia in Georgia. The scenes set in Texarkana were filmed in Jonesboro and the surrounding area with the chase scenes being filmed in areas surrounding Highway 54 between Fayetteville and Jonesboro. The scene where they drive through the Shell petrol station was filmed in Ojai, California on the corner of Ojai and El Paseo.

When Smokey and the Bandit was released it received mixed reviews from the critics. On Rotten Tomatoes it currently holds a rating of 81% and on IMDb, it currently holds a rating of 6.9/10. Critic Leonard Maltin gave Smokey and the Bandit three out of four stars and described the film as “about as subtle as The Three Stooges, but a classic compared to the sequels and countless rip-offs which followed”. 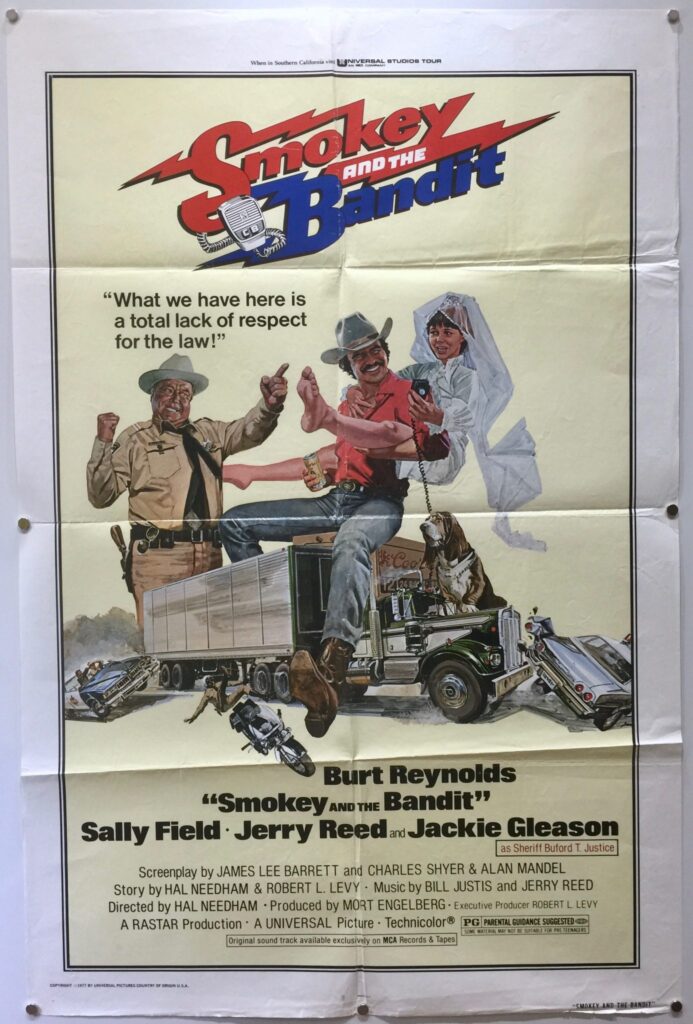 Type of Poster
One Sheet
Style of Poster
Final
Origin of Poster
USA
Year of Poster
1977
Designer
John Solie
Artist
John Solie
Size (Inches)
41″ x 27″
NSS # / Printer Markings
Litho in U.S.A / Smokey and the Bandit
Tagline
“What we have here is a total lack of respect for the law!”