The Spy Who Loved Me (1977) is the tenth spy film in the James Bond series, and the third to star Roger Moore as secret agent James Bond. Curd Jürgens and Barbara Bach co-star. It was directed by Lewis Gilbert and the screenplay was written by Christopher Wood and Richard Maibaum.

The film takes its title from Ian Fleming’s novel The Spy Who Loved Me, the tenth book in the James Bond series, though it does not contain any elements of the novel’s plot. The storyline involves a reclusive megalomaniac named Karl Stromberg, who plans to destroy the world and create a new civilisation under the sea. Bond teams up with a Russian agent, Anya Amasova, to stop Stromberg.

It was shot on location in Egypt (Cairo and Luxor) and Italy (Costa Smeralda, Sardinia), with underwater scenes filmed at the Bahamas (Nassau), and a new soundstage built at Pinewood Studios for a massive set which depicted the interior of a supertanker. The Spy Who Loved Me was well-received by critics. The soundtrack composed by Marvin Hamlisch also met with success. The film was nominated for three Academy Awards amid many other nominations and novelised in 1977 by Christopher Wood as James Bond, The Spy Who Loved Me.

A shipping magnate, Karl Stromberg, has employed two brilliant scientists to develop a submarine tracking system. Once it is finished, he assures them of multimillion-dollar payouts to their Swiss bank accounts, but not before ruthlessly murdering his young assistant by dumping her into a tank inhabited by a man-eating tiger shark. Shortly afterward, British & Soviet submarines vanish while on routine moves, and Bond is called into action. Also called to duty is his Soviet counterpart, Major Anya Amasova. Though they are initially working against each other, the British Secret Service & KGB begin to work together to find the microfilm contains the tracking system. Bond & Anya must deal with Stromberg’s goons who have been ordered to eliminate anyone who comes into contact with the microfilm. One of these is Jaws, a 7′ towering Goliath with metal teeth. When a U.S. submarine is also hijacked, Bond & Anya must move quickly to avert World War 3, which Stromberg is hoping to start… 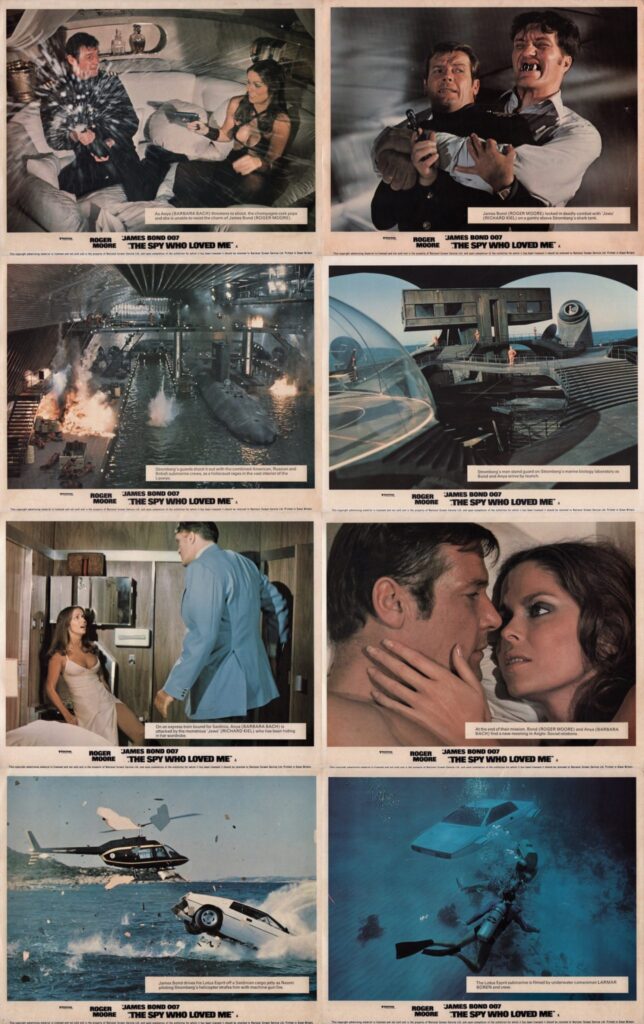