Superman III (also known as Superman 3) is a 1983 film directed by Richard Lester. It was co-produced by Ilya Salkind and Pierre Spengler with David Newman and Leslie Newman writing the screenplay. The characters are based on the DC Comics character Superman by Jerry Siegel and Joe Shuster. Superman III is the third film in the Superman series and the last to be produced by Alexander Salkind and Ilya Salkind. It stars Christopher Reeve, Richard Pryor, Jackie Cooper, Marc McClure, Annette O’Toole, Annie Ross, Pamela Stephenson, Robert Vaughn and Margot Kidder.

The storyline follows Ross Webster, a wealthy businessman who discovers the hidden talents of Gus Gorman, a mischievous computer genius. In a drive for economic control he abuses his talents, and when Superman interferes, something must be done to stop him. When the synthetic Kryptonite created by Gus fails to kill him, it turns him into an evil incarnation of his former self. The tar-laced Kryptonite pits man against himself, setting up the Clark vs. Superman battle.

Originally the series producer Ilya Salkind had written the treatment for the film that included Brainiac, Mister Mxyzptlk and Supergirl, but Warner Bros. did not like it. It was also reported that Gene Hackman and Margot Kidder were angry with the way the Ilya Salkind had treated Superman director Richard Donner, with Hackman retaliating by refusing to reprise the role of Lex Luthor, after Margot Kidder had publicly criticised the producer for their treatment of Donner, the producers reportedly “punished” the actress by reducing her role in Superman III to a brief appearance.

However, Gene Hackman later denied such claims, stating that he had been busy with other movies and the general consensus that making Lex Luthor a constant villain would be akin to incessant horror movie sequels where a serial killer keeps coming back from the grave. Hackman did reprise his role as Lex Luthor in Superman IV, which the Ilya Salkind had no involvement.

In his commentary for the 2006 DVD release of Superman III, Ilya Salkind denied any disagreements between Margot Kidder and his production team and denied the claim that her part was cut for retaliation. Instead, he said, the creative team decided to pursue a different direction for a love interest for Superman, believing the Lois and Clark relationship had been played out in the first two films (but could be revisited in the future). With the choice to give a more prominent role to Lana Lang, Lois’ part was reduced for story reasons. He also denied the reports about Gene Hackman being upset with him, stating that Hackman was unable to return because of other film commitments.

When Superman III was released it received generally negative reviews from the critics, with frequent criticism aimed towards was the inclusion of comedian Richard Pryor as Gus Gorman. On Rotten Tomatoes it holds a 26% rating with the consensus “When not overusing sight gags, slapstick, and Richard Pryor, Superman III resorts to plot points rehashed from the previous Superman flicks”.

Roger Ebert gave the film two and a half stars and said, “Superman III is the kind of movie I feared the original Superman would be. It’s a cinematic comic book, shallow, silly, filled with stunts and action, without much human interest. What’s amazing is that the first two Superman movies avoided that description, creating a fantasy with a certain charm”. 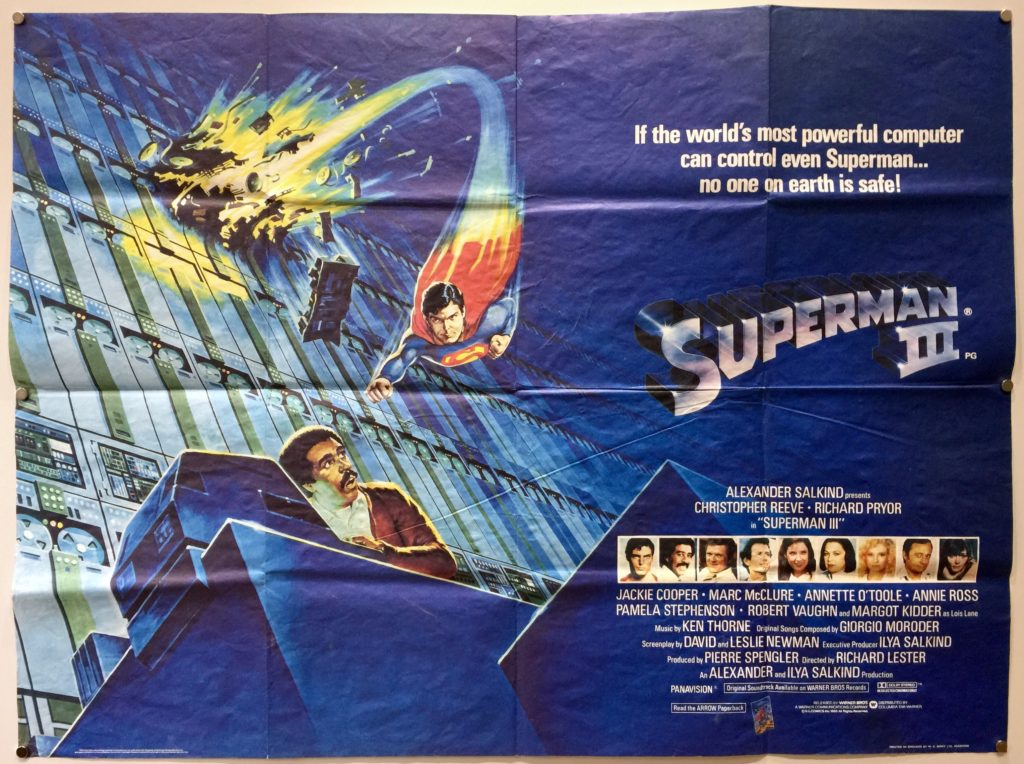