Superman IV: The Quest for Peace (also known as Superman 4) is a 1987 film directed by Sidney J. Furie, based on the DC Comics character Superman. It is the fourth and final film in the original Superman film series, and the first film in that series not to be produced by Alexander and Ilya Salkind, but rather by Golan-Globus’ Cannon Films, in association with Warner Bros. Gene Hackman returned as Lex Luthor, who creates an evil Solar-powered version of Superman called Nuclear Man.

Superman IV was both a critical and commercial failure, with many reviewers criticising the cheap special effects, inconsistencies, lack of originality, and plot holes. Critics have put Superman IV: The Quest for Peace in the category of worst films ever made.

Arch nemesis Lex Luthor, is determined to make the world safe for nuclear arms merchants, and creates a new being to challenge the Man of Steel, Superman. His new creation is a radiation-charged Nuclear Man. He was created after Luthor steals a hair from a museum to aid in his development and creation of Nuclear Man, an android who gets his energy from the sun. The two super-powered foes clash in an explosive screen extravaganza that sees Superman save the Statue of Liberty, repulse a volcanic eruption of Mount Etna, rebuild the demolished Great Wall of China. 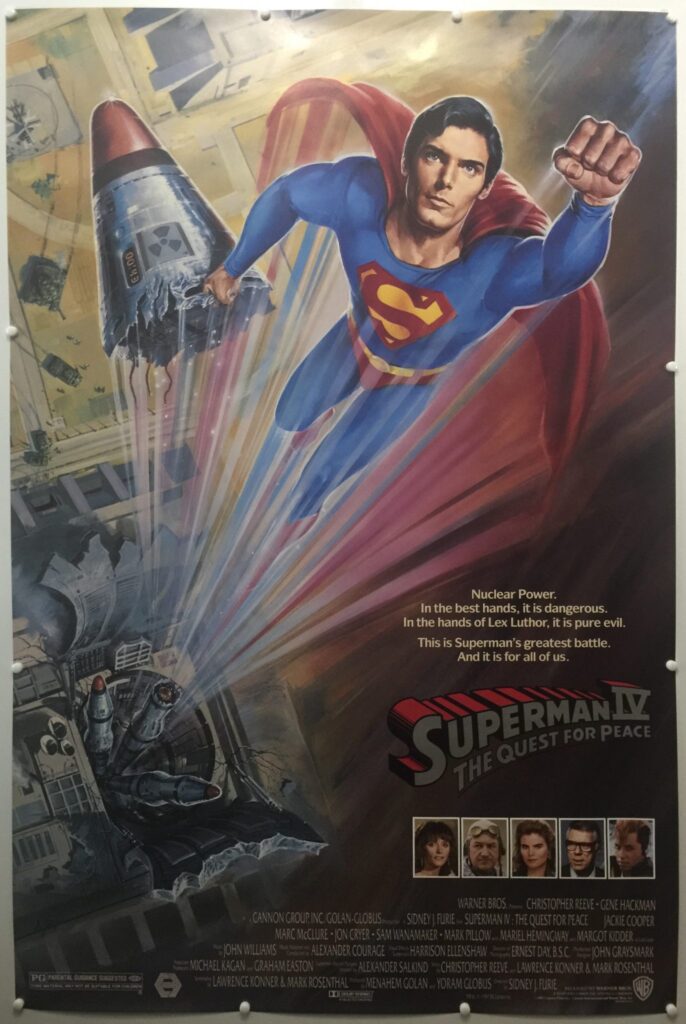 Type of Poster
One Sheet
Style of Poster
Final
Origin of Poster
USA
Year of Poster
1987
Designer
Unknown
Artist
Dan Goozee
Size (Inches)
40.5″ x 26 15/16″
NSS # / Printer Markings
None
Tagline
Nuclear Power. In the best hands, it is dangerous. In the hands of Lex Luthor, it is pure evil.
This is Superman’s greatest battle. And it is for all of us.