Taken is a 2008 film directed by Pierre Morel. It was produced by Luc Besson who co-wrote the screenplay with Robert Mark Kamen. Taken stars Liam Neeson, Maggie Grace, Leland Orser, Jon Gries, David Warshofsky, Katie Cassidy, Holly Valance and Famke Janssen. The film has been cited as a turning point in Liam Neeson career that redefined and transformed him to an action film star.

The storyline follows Bryan Mills, a former CIA operative who sets about tracking down his teenage daughter Kim and her best friend after the they are kidnapped by Albanian sex traffickers while visiting Paris, France.

Originally, Jeff Bridges was cast as Bryan Mills, but he dropped out of the project and Liam Neeson accepted the role. He wanted to play a more physically demanding role than he was used to but thought the film would be a “little side road” for his career, expecting it to be released directly to video.

Taken was released under the title 96 Hours in Germany, Io vi troverò (I Will Find You) in Italy and Заложница (Hostage) in Russia.

When Taken was released it received mixed reviews from the critics. On Rotten Tomatoes it holds a 58% rating with the consensus “Taken is undeniably fun with slick action, but is largely a brainless exercise.”. Richard Corliss of Time said the film “has nothing more on its mind than dozens of bad guys getting beat up and another one turned into instant roadkill”. The Washington Post described the film as “a satisfying little thriller as grimly professional as its efficient hero” and likened the action to the Bourne film series.

Commercially, Taken was a huge box office success. Produced on an estimated production budget of $25m, it took $24,717,037 in the US on its opening weekend. It went on to take $226,830,568 in total worldwide box office receipts.

In October 2012 a sequel was released called Taken 2 with Neeson, Janssen, Grace, Gries, Rabourdin and Orser reprising their roles from the first film. A third Taken film was released 16 December 2014. In September 2015, NBC released a TV series which depicts a younger Bryan Mills with Clive Standen playing the role. 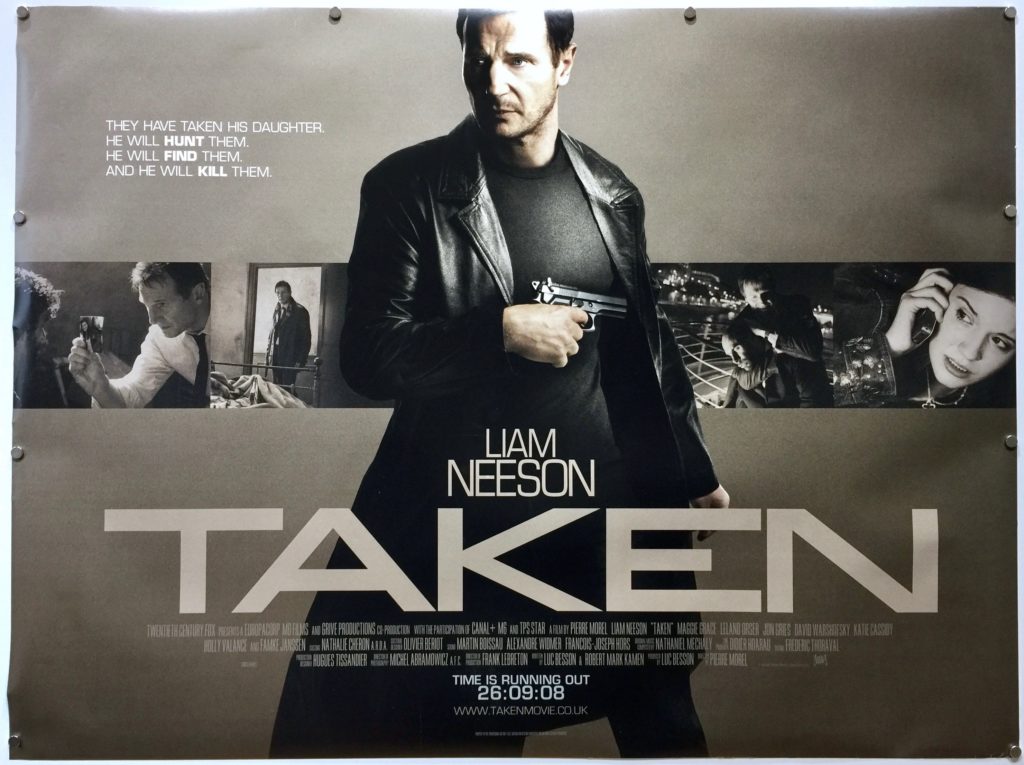 Type of Poster
Quad
Style of Poster
Final
Origin of Poster
UK
Year of Poster
2008
Designer
Empire Design
Artist
Unknown
Size (Inches)
40″ X 30″
NSS # / Printer Markings
None
Tagline
They have taken his daughter.
He will hunt them.
He will find them.
And he will kill them.