The Graduate is a 1967 film directed by Mike Nichols and produced by Lawrence Turman. The screenplay was co-written by Calder Willingham and Buck Henry based on the 1963 novel by Charles Webb, who wrote it shortly after graduating from Williams College. The Graduate stars Anne Bancroft, Dustin Hoffman, Katharine Ross, William Daniels, Murray Hamilton and Elizabeth Wilson.

The storyline follows Ben, having recently graduated from Williams College and with his parents now expecting great things he is becoming increasingly uncomfortable. At a party to celebrate his graduation, he meets Mrs Robinson who is the wife of his father’s business partner. Ben drives her home, leading to an affair between the two. When the affair ends he finds himself falling for Elaine, Mrs Robinson’s daughter.

It is rumoured that Mike Nichols wanted to cast Doris Day for Mrs Robinson, Robert Redford for Benjamin Braddock, and Gene Hackman for Mr Robinson with Doris Day turning down the offer because the nudity required by the role offended her. When Dustin Hoffman auditioned for the role of Benjamin, producer Joseph E. Levine thought that he “was one of the messenger boys”.

Principle photography for The Graduate used the campus of USC in Los Angeles for many of the exterior campus shots of Berkeley. Other locations used for filming were Durant Avenue, College Avenue and the Berkeley campus itself although these were shot remotely from Telegraph Avenue, as the university did not permit commercial filming at the time. The Taft Hotel scenes were filmed at the Ambassador Hotel and the residences used for the Braddocks’ and the Robinsons’ house were located on North Palm Drive in Beverly Hills.

When The Graduate was released it received positive reviews from the critics. On Rotten Tomatoes it currently holds a rating of 91% with the general consensus being, “The music, the performances, the precision in capturing the post-college malaise — The Graduate’s coming-of-age story is indeed one for the ages”. Roger Ebert awarded the film four out of four stars and described The Graduate as the “funniest American comedy of the year”. However, in 1997 Roger Ebert updated his review and he retracted some of his previous praise for the film, noting that he felt its time had passed and that he now had more sympathy for Mrs Robinson than Benjamin (whom he considered “an insufferable creep”), viewing one’s sympathy for Mrs Robinson and disdainful attitude toward Ben as a function of aging and wisdom.

Commercially, The Graduate was a huge box office success. I am unable to find some financial details, notably its opening weekend receipts. Produced on an estimated production budget of $3m, it went to achieve total worldwide box office receipts are $114,945,305.

The leg shown in the iconic image of the poster belongs to Linda Gray and not Anne Bancroft as originally thought. Linda Gray who went onto star in the TV series, Dallas, was Anne Bancroft’s body double. 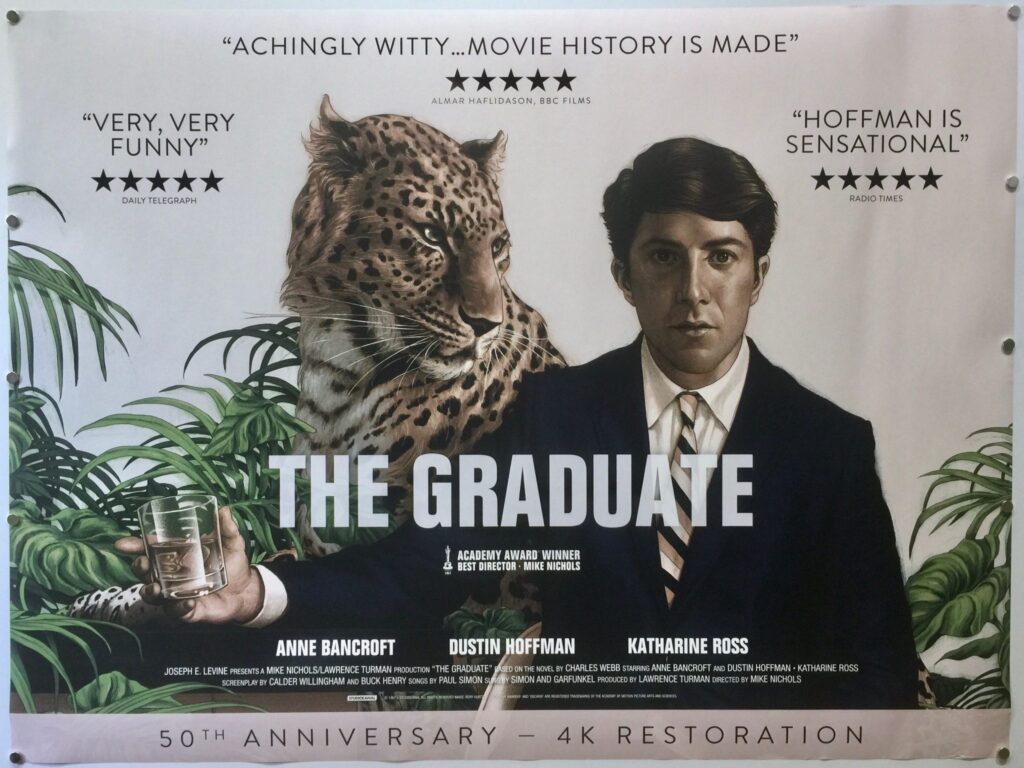