The Jewel of the Nile is a 1985 film directed by Lewis Teague. It was produced by Michael Douglas with the screenplay co-written by Mark Rosenthal and Lawrence Konner. The film is based on the characters created by Diane Thomas and stars Michael Douglas, Kathleen Turner, Danny DeVito, Spiros Focás and Avner Eisenberg.

A sequel to the 1984 film Romancing the Stone, the storyline is based on the adventures of Jack Colton and Joan Wilder. Like the first film, the opening scene takes place in one of Joan’s novels. Jack and Joan have their yacht called Angelina and are moored in the South of France, but they are gradually becoming bored with the way of life and each other. Joan suffering from writer’s block wants to return to New York but Jack prefers to sail aimlessly around the world. Joan accepts an invitation to write an autobiography for Omar, a charming Arab ruler. While there she is abducted and Jack decides to rescue her with his new partner Ralph. This sends them off on a new adventure in a fictional African desert, in an effort to find the fabled jewel.

Both Kathleen Turner and Michael Douglas only agreed to make a sequel due to contractual obligations. During production, Kathleen Turner who had negotiated a script approval tried to back out of the project. This was until the distributors 20th Century Fox threatened her with a $25m lawsuit. Michael Douglas intervened to ensure the rewrite was made.

Upon its release it received fairly negative reviews from critics who felt that the film had numerous plot holes and it lacked the charm of the first film. The New York Times wrote in its review, “There’s nothing in The Jewel of the Nile that wasn’t funnier or more fanciful in Romancing the Stone”. Roger Ebert of the Chicago Times agreed and wrote: “… it is not quite the equal of Romancing the Stone”. However, he praised the chemistry between Michael Douglas and Kathleen Turner and said: “It seems clear, that they like each other and are having fun during the parade of ludicrous situations in the movie, and their chemistry is sometimes more entertaining than the contrivances of the plot”. Michael Douglas, Kathleen Turner and Danny DeVito were later reunited for the unrelated film The War of the Roses.

Commercially The Jewel of the Nile was a success and grossed more in box office revenues than the first film. Produced with an estimated budget of $25m, the film grossed $96,773,200 in worldwide box office receipts. 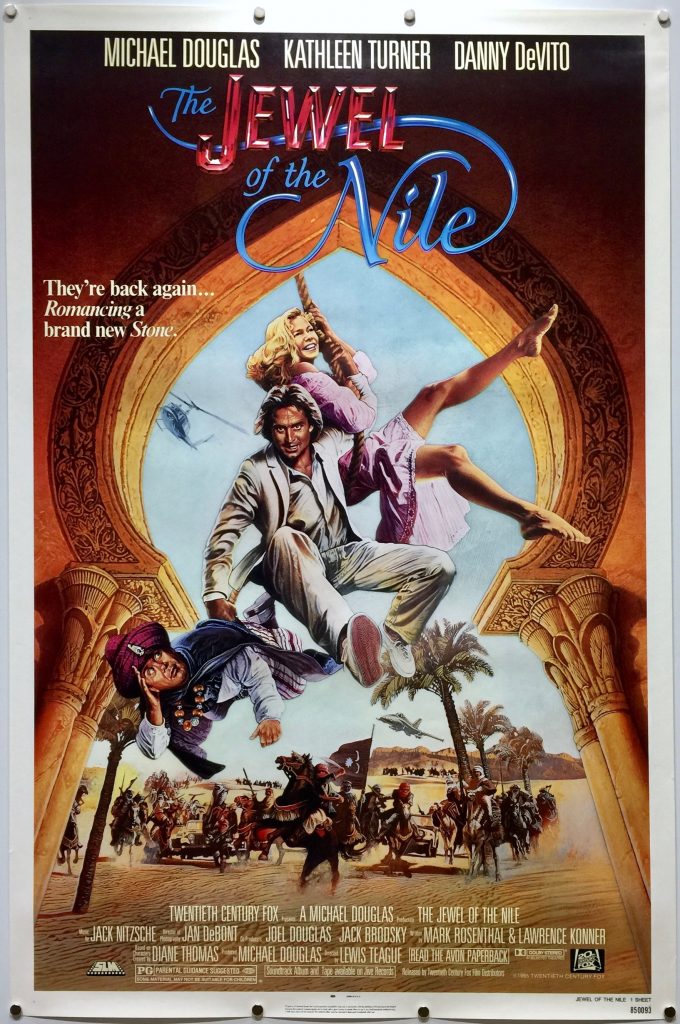