The storyline for The NeverEnding Story II used plot elements from Michael Ende’s novel The Neverending Story, primarily for the second half of the film but introduced a new storyline. Once again, Bastian is transported to the world of Fantasia which he recently managed to save from destruction. However, the land is now being destroyed by an evil sorceress, Xayide, so he must join up with Atreyu and face the Emptiness once more.

Dieter Geissler said he always intended to make a trilogy out of The Neverending Story, finding the book “just too rich to leave at one film.” However, his plans to follow the original film, which only covers half of the novel, had to be postponed as Michael Ende sued Dieter Geissler and the production company, insisting that he have a say in any future film treatments of his work. As soon as the legal problems were solved, Geissler started a year-long pre-production working with conceptual artist Ludwig Angerer, to ensure the film’s design and technical ambitions would fit into a lower budget, along with averting the problems the first movie faced with its effects.

Screenwriter Karin Howard contributed 14 drafts until the final screenplay, which draws inspiration from most chapters in the second half of the novel. Dieter Geissler opted to hire a director only when the development was finished, as he considered effects-heavy productions “burn a director out real fast when they’re in on a picture from the earliest pre-production stages. What I wanted was for the director to come in fresh and not already worn out and to be able to put his ideas on an already solid structure.” George T. Miller was brought in to direct, having been a confessed fan of the original film.

Over 600 children were auditioned for the film due to the original actors being too old for their respective roles. In contrast to The NeverEnding Story relying on blue screen and scale model creatures, The Next Chapter would have more life-sized model work and matte paintings.

Principal photography was completed at Bavaria Film near Munich, Germany. The original plan was to build three separate stages, having first and second unit shooting simultaneously on the first two stage and have the effects done on the third. However, the studio decided not to build the third stage at the last minute, forcing production to shoot first and second unit on the same stage at the same time.

The working schedules for the child actors limited their working schedules, which meant that George T. Miller could only rehearse scenes once before filming. In order to maximise the time on set, he shot with three cameras for each scene.

When The NeverEnding Story II was released it received negative critical reviews, with many commenting it was an inferior sequel. Richard Harrington of The Washington Post wrote, “Unlike its predecessor, there are few effects in II worthy of being called special, and events unfold with uniform flatness. Silver City feels like Diet Oz, the sorceress’s castle is more hinted at than realised and several new creatures are right out of late-night comedy sketches”.

The NeverEnding Story II was produced on an estimated budget of $36m. In its opening weekend of release, it took $4,912,124 at the US box office. However, it struggled to recoup anywhere near it production budget and only grossed $17,373,527 in US box office receipts. 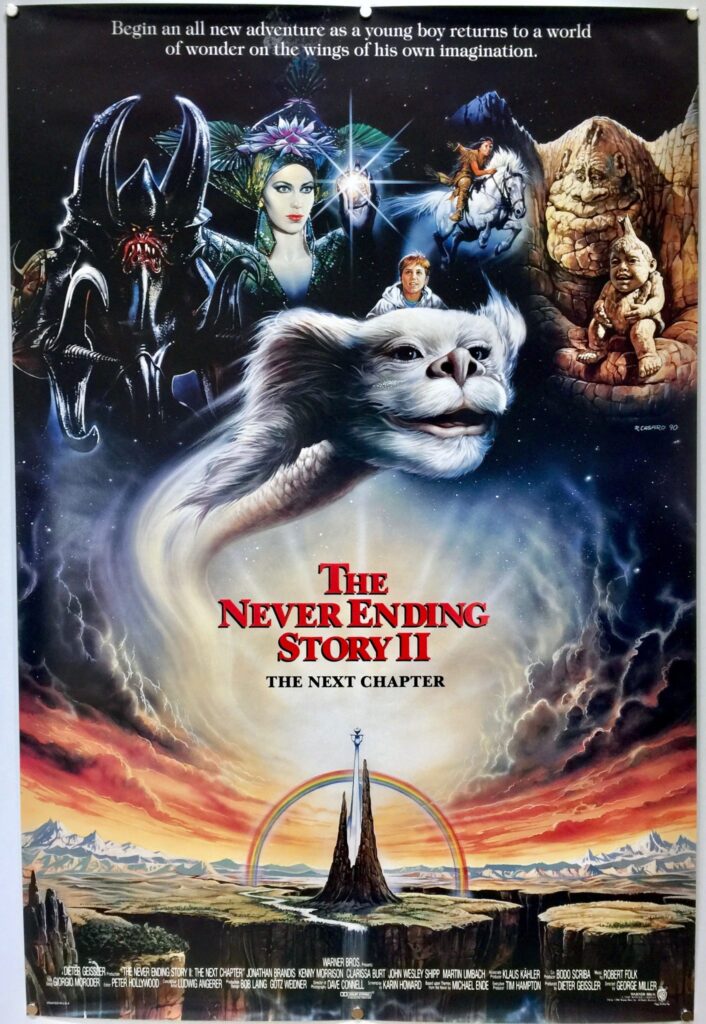 Type of Poster
One Sheet
Style of Poster
International
Origin of Poster
USA
Year of Poster
1990
Designer
Unknown
Artist
Renato Casaro
Size (Inches)
40″ x 27″
NSS # / Printer Markings
Printed In U.S.A.
Tagline
Begin an all new adventure as a young boy returns to a world of wonder on the wings of his own imagination.