The storyline follows Hugh Glass exploring uncharted wilderness in 1823 where he sustains injuries from a brutal bear attack. When his hunting team leaves him for dead, Glass must utilise his survival skills to find a way back home while avoiding natives on their own hunt. Grief-stricken and fuelled by vengeance, Glass treks through the wintry terrain to track down John Fitzgerald, the former confidant who betrayed and abandoned him.

Principle photography was completed in twelve locations in three countries: Canada, the United States, and Argentina. In Canada, filming took place in Calgary and Fortress Mountain in Alberta, in Kananaskis Country west of Calgary, the Badlands near Drumheller, and at Squamish and Mammoth Studios, Burnaby, in British Columbia. The scenes in the waterfall were filmed at the Kootenai Falls near Libby, Montana. While the initial plan was to film entirely in Canada, the weather was ultimately too warm, leading the filmmakers to locations near the Rio Olivia at the tip of Argentina with snow on the ground, to shoot the film’s ending.

When The Revenant was released it received positive reviews from critics, with DiCaprio and Hardy’s performances, Iñárritu’s directing and Lubezki’s cinematography all being praised. However, the film’s runtime was criticised.

On Rotten Tomatoes it holds a 80% rating with the consensus “As starkly beautiful as it is harshly uncompromising, The Revenant uses Leonardo DiCaprio’s committed performance as fuel for an absorbing drama that offers punishing challenges — and rich rewards”.

Commercially, The Revenant was a huge box office success. Produced on an estimated production budget of $135m, it took $471,000 on its limited release opening weekend in the US. It went on to take $532,925,985 in total worldwide box office receipts. 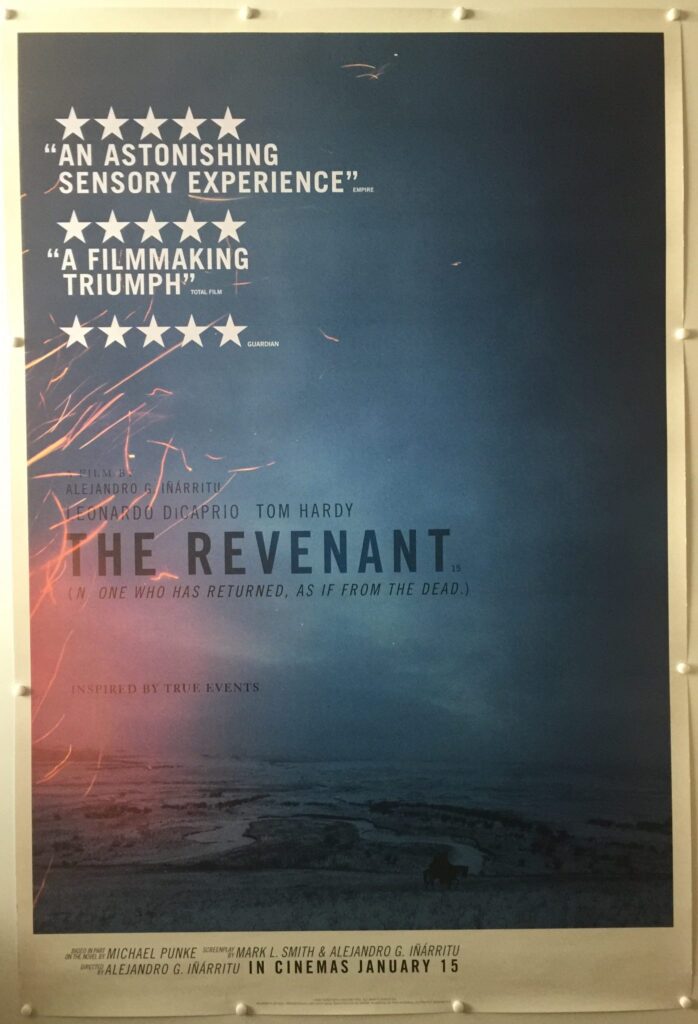 Type of Poster
One Sheet
Style of Poster
Advance
Origin of Poster
UK
Year of Poster
2015
Designer
Unknown
Artist
Unknown
Size (Inches)
40″ X 27″
NSS # / Printer Markings
None
Tagline
n. One who has returned, as if from the dead.