The Running Man is a 1987 action film directed by Paul Michael Glaser and starring Arnold Schwarzenegger, María Conchita Alonso, Jesse Ventura, Jim Brown and Richard Dawson (in his final film). It is very loosely based on the 1982 novel The Running Man, written by Stephen King and published under the pseudonym Richard Bachman. The film, set in a dystopian United States between 2017 and 2019, is about a television show called The Running Man, where convicted criminal called runners must escape death at the hands of professional killers. However, in the book, the runners are normal citizens who begrudgingly participate in the games for a chance to win some credits to support their families.

Original director Andrew Davis was fired one week into filming and replaced by Paul Michael Glaser. Arnold Schwarzenegger openly stated that it was a terrible decision because Glaser shot the movie like it was a television show, losing all the deeper themes. He believed this hurt the story of the movie. Paula Abdul is credited with the choreography of the Running Man dance troupe.

The year is 2017. The world economy has collapsed. The United States has sealed off its borders and has become a military controlled police state controlling TV, movies, art, books, communication and censorship. In the police state, America has become, criminals have a choice. They can serve their sentences in prison or they can take part in The Running Man. A government owned violent gameshow where contestants run for freedom while being pursued by Stalkers. The Stalkers are wrestler-like bounty hunters. The Running Man is the top rated show on network TV and Damon Killian, the creator and host is the most popular entertainer in the US.

However, one man has yet to play… Former L.A. police officer Ben Richards, framed for the massacre of innocent people, when he disobeyed orders and after escaping from prison, is recaptured. Ben is forced to appear on The Running Man, joined by resistance fighters William Laughlin, Harold Weiss and Amber Mendez who was a network employee who Richards took a hostage and then turned Richards into the authorities. They are chased by The Stalkers, through the game arena whilst they search for the secret base of the resistance, to broadcast the truth about the government and prove Ben’s innocence. 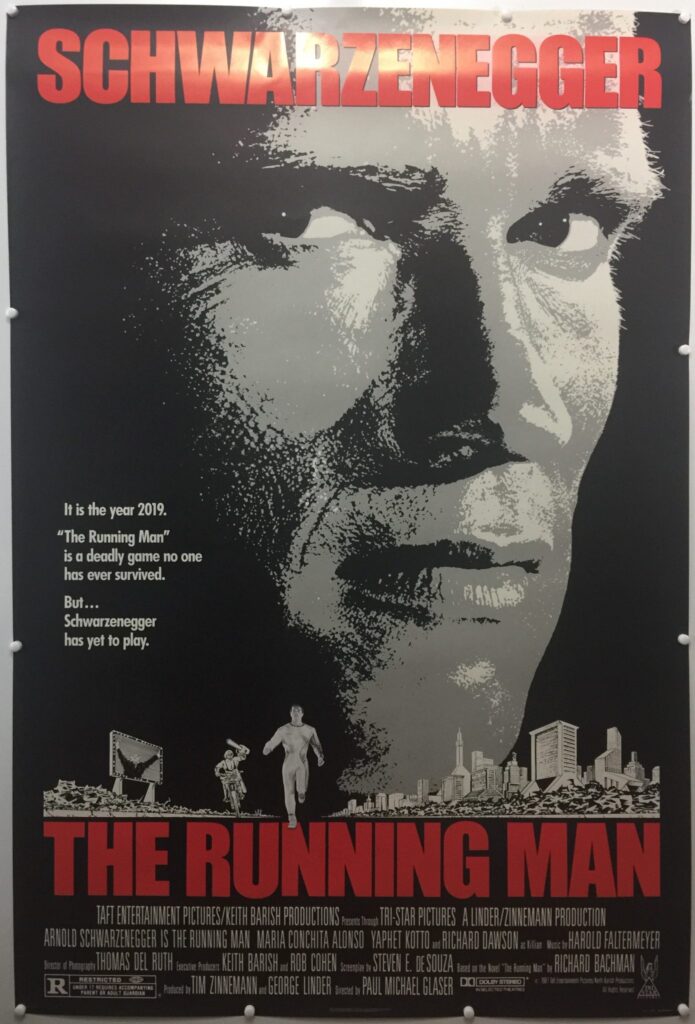 Type of Poster
One Sheet
Style of Poster
Final
Origin of Poster
USA
Year of Poster
1987
Designer
Unknown
Artist
Unknown
Size (Inches)
40 1/8″ x 27″
NSS # / Printer Markings
870063
Tagline
It is the year 2019.
The “Running Man” is a deadly game no one has ever survived.
But… Schwarzenegger has yet to play.