Trading Places is a 1983 film directed by John Landis and stars Dan Aykroyd, Eddie Murphy, Ralph Bellamy, Don Ameche, Denholm Elliott, and Jamie Lee Curtis. It tells the story of an upper-class commodities broker and a homeless street hustler whose lives cross paths when they are unknowingly made part of an elaborate bet. The storyline is often called a modern take on Mark Twain’s classic 19th-century novel The Prince and the Pauper. It also bears a resemblance to another of Mark Twain’s stories, The Million Pound Bank Note.

Trading Places was written by Timothy Harris and Herschel Weingrod. It was produced by Aaron Russo. It was released to theatres in North America on 10th June 1983, where it was distributed by Paramount Pictures. The film earned over US $90 million during its theatrical run in the United States, finishing as the fourth highest earning film of the year and the second highest earning R-rated film of 1983.

Trading Places was nominated for an Academy Award for its film score and two Golden Globe for best motion picture and best performance by an actor in comedy categories. It won two BAFTA awards for best supporting actress and actor awarded to Jamie Lee Curtis and Denholm Elliott respectively. Also nominated for a BAFTA award for best original screenplay.

The “nature-nurture” theory that motivated so many Three Stooges comedies is the basis of John Landis’s hit comedy. The fabulously wealthy but morally bankrupt Duke brothers (Ralph Bellamy and Don Ameche) make a one-dollar bet over heredity vs. environment.

Curious as to what might happen if different lifestyles were reversed, they arrange for impoverished street hustler Billy Ray Valentine (Eddie Murphy) to be placed in the lap of luxury and trained for a cushy career in commodities brokerage. Simultaneously, they set about to reduce aristocratic yuppie Louis Winthorpe III (Dan Aykroyd to poverty and disgrace, hiring a prostitute (Jamie Lee Curtis) to hasten his downfall.

When Billy Ray figures out that the brothers intend to dump him back on the streets once their experiment is complete, he seeks out Winthorpe, and together the pauper-turned-prince and prince-turned-pauper plot an uproarious revenge. With the good-hearted prostitute and Winthorpe’s faithful butler (Denholm Elliott) as their accomplices, they set about to hit the brothers where it really hurts: in the pocketbook. 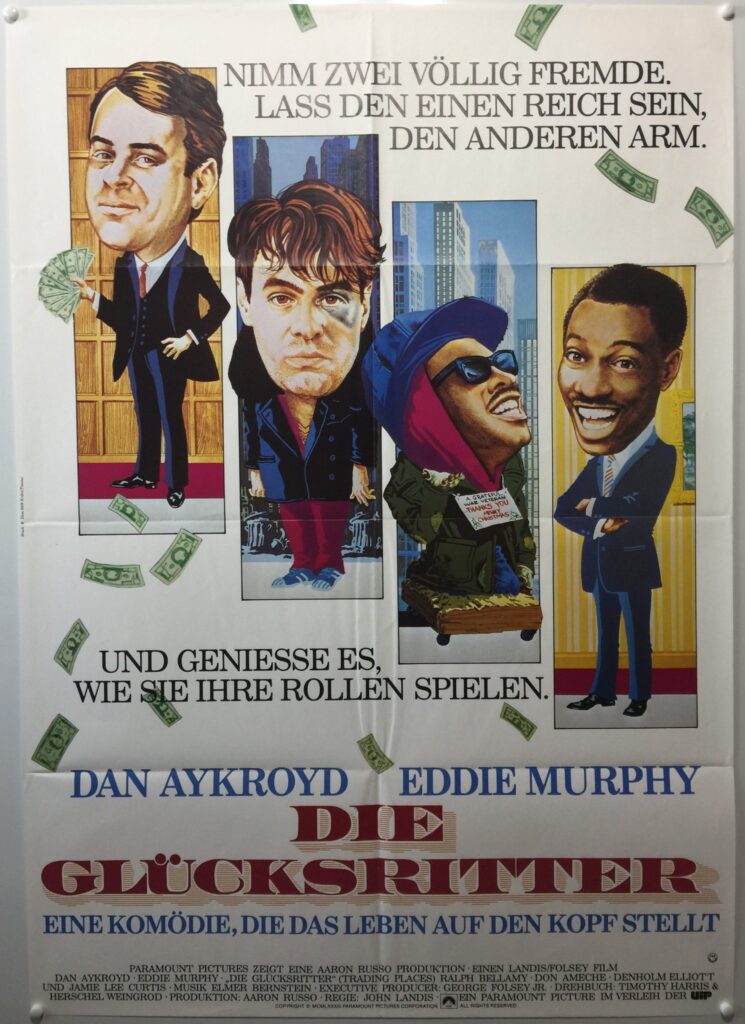