Trainspotting is a 1996 film directed by Danny Boyle. It was produced by Andrew Macdonald with the screenplay being written by John Hodge. The film is based on the 1993 novel, Trainspotting, written by Scottish author Irvine Welsh. It stars Ewan McGregor, Ewen Bremner, Jonny Lee Miller, Kevin McKidd, Robert Carlyle and Kelly MacDonald in her first acting role.

After the producer had read the novel on a flight in December 1993 he felt that he could adapt the novel into a film. Danny Boyle was excited by the film and described it as “the most energetic film you’ve ever seen – about something that ultimately ends up in purgatory or worse”. He convinced the author to let him have the film rights after writing him a letter saying that John Hodge and Andrew Macdonald were “the two most important Scotsmen since Kenny Dalglish and Alex Ferguson”.

As well as Danny Boyle others were interested in the film rights. Irvine Welsh recalled about the other interested party, “they wanted to make a po-faced piece of social realism like Christiane F or The Basketball Diaries”. He was really impressed that Danny Boyle and his team wanted everyone to see the film and have it turned into an arthouse production.

The principle photography for the film took place in an abandoned cigarette factory in Glasgow. Due to time constraints and a very tight budget of just £1.5m many of the scenes were completed in one take. This contributed to the grungy look of the film. 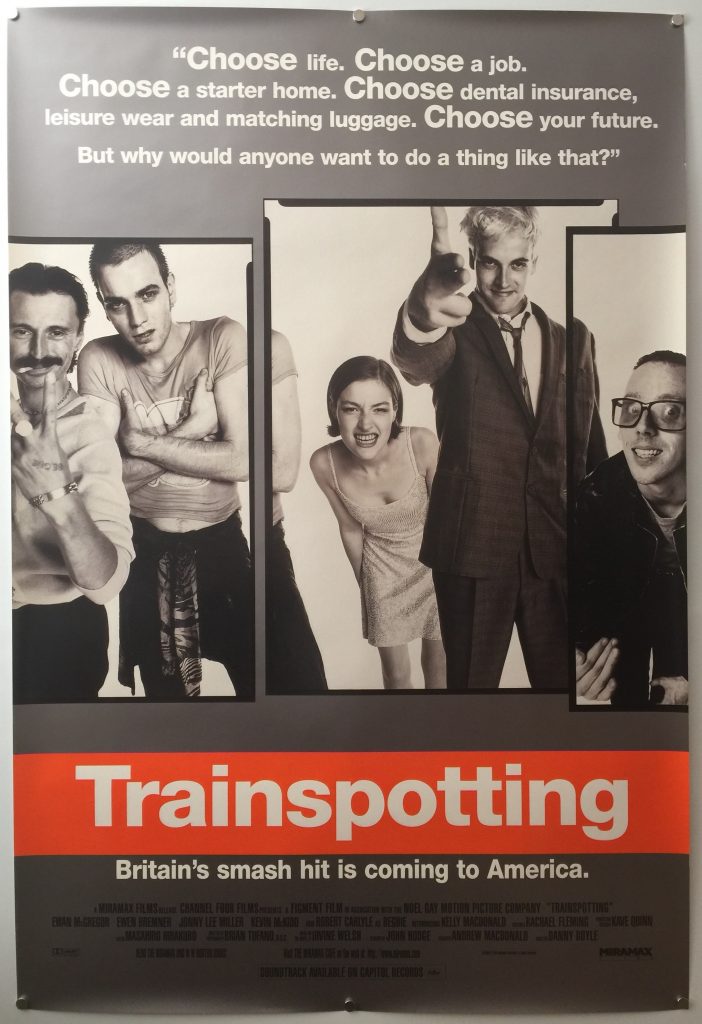 Type of Poster
One Sheet
Style of Poster
Final
Origin of Poster
USA
Year of Poster
1996
Designer
Tarhan Creative
Artist
Lorenzo Agius (Photography)
Size (Inches)
40″ x 27″
NSS # / Printer Markings
None
Tagline
“Choose life. Choose a job. Choose a starter home. Choose dental insurance, leisure wear and matching luggage. Choose your future. But why would anyone want to do a thing like that?”