Who Dares Wins (known as The Final Option in the USA) is a 1982 film directed by Ian Sharp. It was produced by Chris Chrisafis, Euan Lloyd and Raymond Menmuir with Reginald Rose writing the screenplay. It stars Lewis Collins, Judy Davis, Richard Widmark, Tony Doyle, John Duttine, Kenneth Griffith, Rosalind Lloyd, Ingrid Pitt, Norman Rodway, Edward Woodward and Robert Webber. The title for the film, Who Dares Wins, is the motto of the elite UK Special Air Service (SAS).

The plot for Who Dares Wins is inspired by the Iranian Embassy siege in 1980, where the UK’s SAS dramatically stormed the building to rescue those being held hostage inside. Euan Lloyd got the idea for making the film watching the Siege of the Iranian Embassy in London (he lived half a mile from the Embassy and watched some of the action take place), but he had to move quickly to prevent the idea being taken by somebody else. An initial synopsis was created by George Markstein. This was then turned into a novel by James Follett as The Tiptoe Boys, in thirty days. Meanwhile, chapter-by-chapter as the novel was completed, it was posted to Reginald Rose in Los Angeles, who wrote the final screenplay.

The storyline of Who Dares Wins follows SAS Captain Peter Skellen after he is thrown out of the SAS for gross misconduct due to unnecessary violence and bullying. He soon finds himself being recruited by The People’s Lobby, a fanatical terrorist group aiming to hold several US dignitaries hostage by taking of a diplomatic embassy. However, Skellen’s dismissal was a front to enable him to get close to the terrorist group to stop the Lobby from creating an international incident.

Filming began in September 1981 and among the advisors for the film were former members of the SAS. The Ministry of Defence was concerned that the film could breach the Official Secrets Act but Euan Lloyd says the Ministry eventually gave their “tacit approval” to the film after two small changes to the story were made; “after that they opened the door quite widely and even provided three military helicopters,” the producer said.

An SAS trainer (Alan Chalky White) was used to train the actors portraying SAS troopers. However, Ian Sharp said Lewis Collins required no training and impressed the SAS instructor with his skills. During one of his visits to Stirling Lines, Ian Sharp had met with a Fijian trooper who had a mishap during the Iranian Embassy assault. The trooper told how he got caught up in his descent and his uniform caught fire due to the explosives used for their forced entry. Inspired by this, Sharp had a similar scene inserted.

When it came time to shoot the SAS assault on the US Embassy, the crew had prepared the helicopters and stuntmen but the SAS offered to do the scene instead. Sharp accepted as he thought the look they gave could not be replicated by the crew.

When Who Dares Wins was released it received negative critical reviews. Roger Ebert of the Chicago Sun-Times said: “There are so many errors of judgment, strategy, behaviour and simple plausibility in this movie that we just give up and wait for it to end. You know you’re in trouble when the movie’s audience knows more about terrorism than the terrorists do”. Within days of the film’s release, producer Lloyd received a phone call from Stanley Kubrick saying how much he enjoyed the film, in particular, the performance of Judy Davis.

Soon after the film was completed, copies of it were requested for viewing by the White House; it was seen by Ronald Reagan and his advisers at Camp David who reportedly enjoyed the film. It was also enjoyed by Alexander Haig, Reagan’s former Secretary of State, who had recently joined the board of MGM/UA. On his recommendation, MGM/UA bought the film for distribution in the US. They retitled it The Final Option. 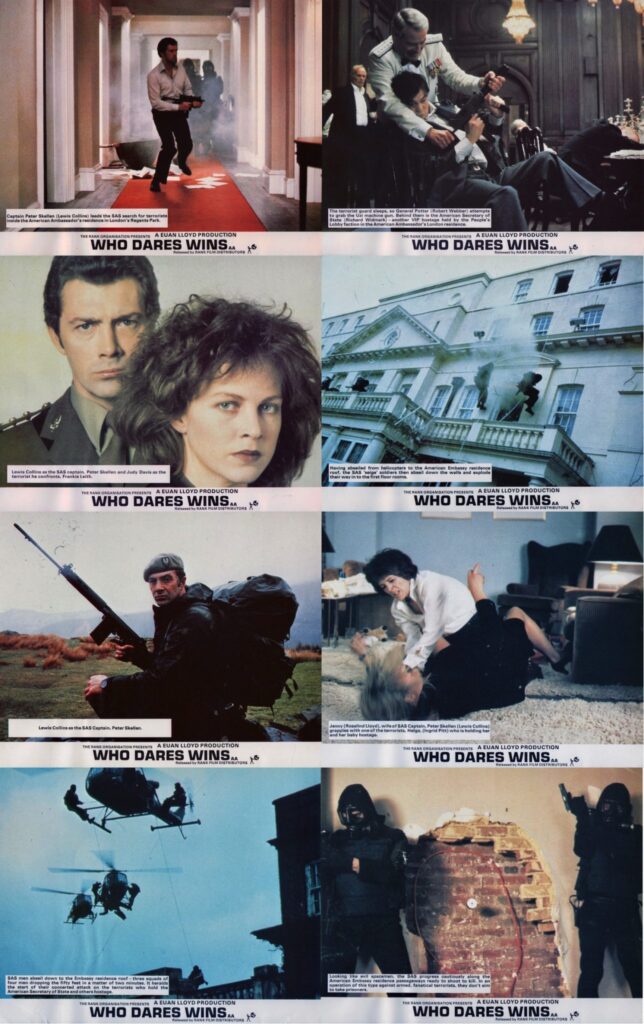